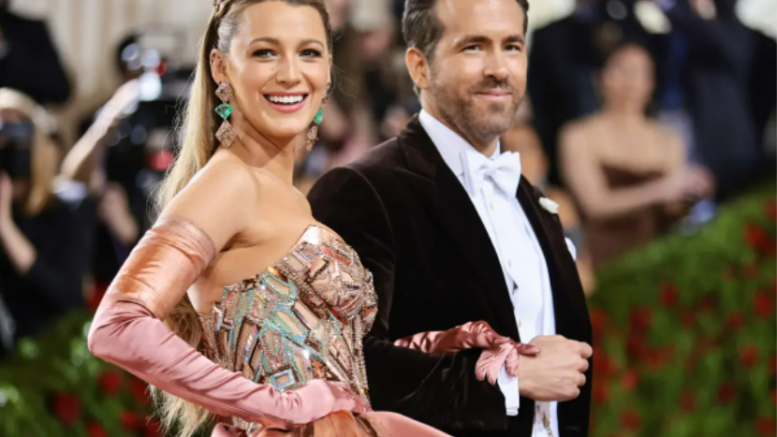 On May 2, 2022 the annual Met Gala was held for the first time in two years. This year’s theme was Gilded Glamor and many celebrities came with their A game, stunning all. Here are five of the showstopping looks: 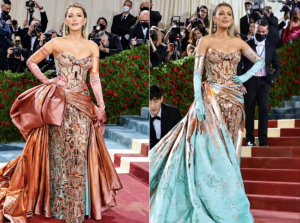 Blake Lively and her husband, Ryan Reynolds, were co-chairs for the event. She stunned in a Versace gown that started off copper-colored and transformed to a blue tone mid-carpet with the help of three assistants. Blake’s dress contained different designs to represent the architecture around New York City. This included a pattern of the constellations at Grand Central Station, a pattern representing the Empire State Building, and a representation of the Statue of Liberty in some of the draping on her side and the seven spikes and 25 jewels in her crown, representing the seven spikes and 25 windows in the crown of the Statue of Liberty. This, and she said her dress ‘patinaed’ through her transformation, just like much of the classic architecture in New York City. 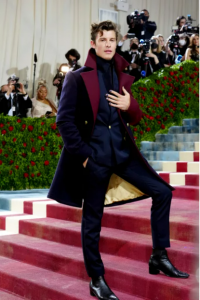 Shawn Mendes walked the red carpet in a red and navy Tommy Hilfiger coat that had his initials embroidered on its inner lining. Underneath, he was wearing a navy turtleneck and suit. The star also included matching nail polish to finish off the look. In an interview with Vogue, Shawn revealed that his outfit was made completely of upcycled materials and that the inspiration for his look came from the look of a Navy captain. 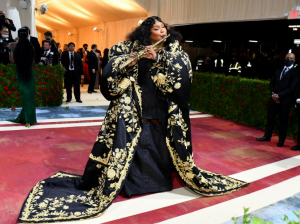 Lizzo stunned in a black gown, stacked gold choker, trailing gold and black coat, and long, black nails. She also carried her gold flute, adding to the look. Her coat was hand-embroidered by Thom Browne and took twenty-two thousand hours to make, according to the star. 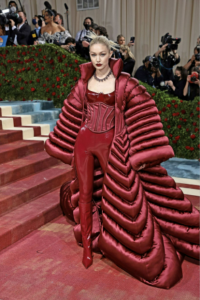 Gigi Hadid walked the carpet in a completely red ensemble by Versace. It included a latex jumpsuit covered by a boned corset, a silk puffer jacket, and knee-high leather boots. In an interview with Vogue, Gigi said that the inspiration for the outfit came from how the shapes for women’s wear in the 1800s were exaggerated and starting to push boundaries. The model also stated that the jacket was the heaviest thing she had worn to the Met Gala before. 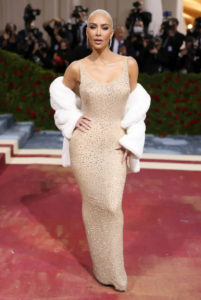 Kim Kardashian walked the carpet in the neutral-toned, sparkly dress Marilyn Monroe wore in 1962 to sing happy birthday to President John F. Kennedy. Ripley’s Believe It or Not! let the reality star borrow the dress for the night, but the dress was designed by Jean Louis, originally sketched by Bob Mackie.

Kim’s appearance in this dress caused a lot of mixed opinions. Bob Mackie stated, “[Marilyn] was a goddess. A crazy goddess, but a goddess. She was just fabulous. Nobody photographs like that. And it was done for her. It was designed for her. Nobody else should be seen in that dress.”

The Kardashian not only wore this iconic dress but also lost 16 pounds through a crash diet to fit into it, causing more controversy. Lili Reinhart said, “To openly admit to starving yourself for the sake of the Met Gala. When you know very well that millions of young men and women are looking up to you and listening to your every word. The ignorance is other-worldly disgusting.”

Finally, stirring the pot just a little more, Kim showed up with her new boo, Pete Davidson, in their first ever Met Gala appearance as a couple. Not only this, but they were the last people to arrive and walk the red carpet.