May 9th is an essential day in Russian history. It marked the Soviet Union’s triumphant victory over Nazi Germany in 1945. Almost 80 years later, the president of Russia of 18 years, Vladimir Putin, delivered a speech during another war proclaiming victory in the war against Ukraine. With the entirety of NATO supporting Ukraine, Putin uses his speech to explain and justify his reasonings; however, how effective his methods were questionable. 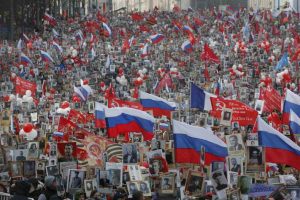 People carry flags and pictures of World War Two soldiers as they take part in the Immortal Regiment march during the Victory Day celebrations, marking the 72nd anniversary of the victory over Nazi Germany in World War Two. Source: Wikipedia

May 9 is an annual celebration celebrated by more than 16 countries to commemorate Nazi’s Germany defeat at the hands of the Soviet Union in World War II. Its historical significance far exceeds Putin’s attempt to capitalize on it against Ukraine. In World War II the Soviet Union suffered an impossible amount of human losses with as many as 27 million Soviets dying. This breakdown includes 11.4 million military casualties and millions of civilians dying because of the effects of the war. May 7, 1945, marked the first sign of the German Instrument of Surrender. After Adolf Hitler committed suicide, Nazi Germany was left with no leader, and when faced with the increasing forces of American and Soviet forces, Germany had very limited options. The initial signing was held in Reims which was perceived as a preliminary signature of the unconditional surrender of Nazi Germany. A second document was signed in the outskirts of Berlin with Field-Marshal Wilhelm Keitel, a representative of the Supreme High Command of the Red Army, and Air Chief Marshal Arthur Tedder all in attendance. Almost two months after the initial signing, an infamous celebration officiated by Joesph Stalin held by Soviet Armed Forces paraded the streets of Red Square. This celebration was a celebration of the people, but mainly a celebration of the officers that fought in the war. In recent years the celebration has shifted as a symbol of patriotism in times of need for Russia, like now, when Putin is trying to use it to raise patriotism.

The Raw Contents of his Speech

Putin begins his speech by congratulating generals, officers, and all military personnel for their patriotism in the war in Ukraine. He then goes on to explain the significance of May 9th. May 9th will long be etched in the Soviet Union’s history, and the war’s memories will live on. This leads to a parallel between the Ukrainian conflict and the Soviet struggle against Russia, and the assertion that winning conflicts like this is in Russia’s DNA. He adds around halfway through his address that there were attempts to prevent the conflict, but NATO was not as eager to accept it as they assumed. He compares NATO’s desire to increase its influence on the Soviet Union territory to Nazism. He says that, with the threat of explosives, military outspread, and other factors, Russia must take action. He then goes on to illustrate the United States’ complex after considerably assisting in World War II, and how much pride is disrespectful to many others as well as their country. He also blames the United States’ impudence on the cancel culture, in which the US fabricates a story about what happened in Russia. 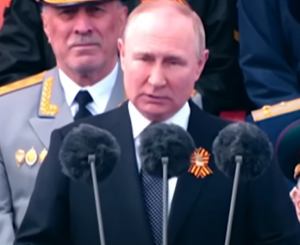 Surprisingly, he then honored US soldiers for their service and hard work during WWII, even though they were barred from attending the victory parade. He makes numerous parallels to World War II, continues to compare Ukraine to Nazis, and then says to bow his head in honor of the people who died during WWII as a result of the Nazi dictatorship. He continues to honor Russians, praising medical staff, military, and servicemen in particular. Putin continues to try to instill patriotism in Russians by mentioning the numerous acts of international terrorism perpetrated against them, despite the fact that Russia continues to persevere and triumph. “Glory to our magnificent armed forces, for Russia, for victory, Hoorah!” he closes his statement.

The most striking aspect of Putin’s speech is that he does not reference the war in Ukraine, nor does he make any threats toward NATO or Ukraine; instead, he tries to raise patriotism in Russia and clear his name in the eyes of the entire world. He sees western influence and depictions of the war as a desperate attempt to delegitimize him and defamation of his country. When all eyes are on him and what he will say at this celebration, he chooses the passive approach and, rather than inciting violence, boosts the spirit of Russian nationalists to reassure them that the fight is not pointless.