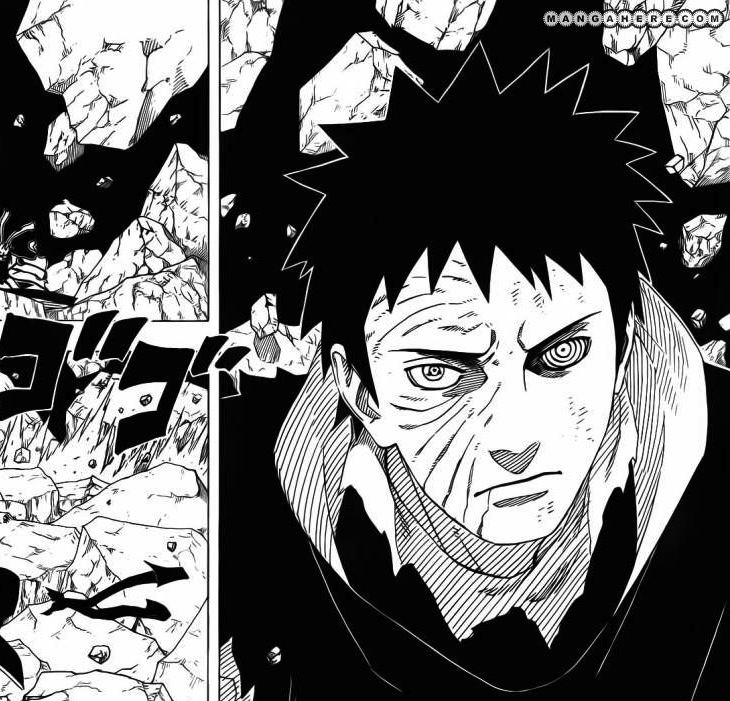 By: Sean Yamakawa and Ashwin Mitra

For you fellow Naruto followers, this week’s Naruto chapter release must have been very confusing.

The manga finally reveals the the fake “Madara’s” identity: Obito.

Why this makes sense:
1) The names “Tobi” and “Obito” are very similar. The author must have been hinting at something when he named these two characters.
2) Tobi only has one sharingan. Obito gave his left sharingan to Kakashi, so it makes sense that Obito only has his right one left. 4) Obito was never confirmed dead- the body was never found.

Why this doesn’t make sense:

1) Obito had positive ideals. Above anything else, he believed in camaraderie, trust, and loyalty. Why would he toss aside his values and start the next ninja world war?

2) Obito was weak. Obito could not even compete against Kakashi. Thus, it is difficult to believe that Obito (as Tobi) has managed to defeat pretty much everyone in Konoha. The Fourth Hokage even said that the masked figure (Tobi) could only be Madara, judging by his strength, but Obito was not an exceptionally powerful shinobi.

3) Tobi knows stuff from the past Obito can’t know. For example, Tobi explained to Sasuke how the Uchiha revolution began, including the motivations of both the Uchiha and Konoha. Tobi also talks about Madara’s relationship with his brother, Izuna, when they rose to power.

After talking this over with a friend of mine, we found a interview of the author of Naruto.
One questions goes, “Then the rumors are true? Is Toby really Izuna?” to which Kishimoto replies, “Well, the truth of his survival is much different….but yes, Izuna is Tobi.” (http://www.fandom.com/fandom/naruto/blogs/2371/interview-with-kishimoto-at-comic-market-78/)

There is no evidence indicating this interview is real. Regardless, it poses a good question: Is Tobi really Izuna?

Why this makes sense:

1) During his fight against Danzo’s subordinate, Tobi revealed that his body was made of some Zetzu goo. 2) Izuna specifically chose Obito as a host because Izuna was weak, having given his sharingan to Madara. The other Uchiha would not be as easy of targets.
3) Obito’s other eye could not have been crushed. If the boulder hit him hard enough to crush his eye, it also would have crushed his skull, killing him then. Instead, Obito was only trapped under the boulder.

Why this doesn’t make sense:

1) I had always believed that Kakashi unlocked his Mangekyo from indirectly killing Obito. If Obito didn’t die, though, how did Kakashi unlock his Mangekyo?
2) How has Izuna remained immortal all this time?
3) It was discovered that Itachi enlisted the help of Madara (Tobi) when he destroyed the Uchiha clan. Why would Izuna, who believed the prestige of the Uchiha, agree to this? 4) Once (and just once), it was shown that Tobi has two sharingan! It is possible, though, that this is a sharingan saved for when he must used Izanagi. But enough about my  thoughts, what do you guys think? Hit up the comments below!

Naruto: What Is Going On?