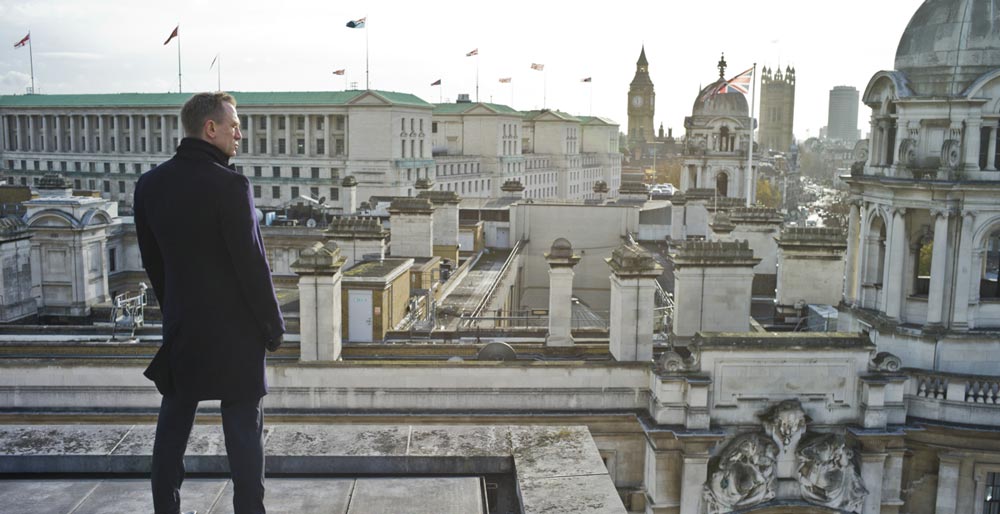 Summary: In a mission to retrieve a stolen hard drive containing highly confidential information, Bond (Craig) is accidentally shot by a fellow agent (Harris), effectively putting his career on hiatus. While Bond struggles to return to his former glory, a list of MI6 agents undercover in terrorist agents around the globe (along with photographs and aliases) is decrypted off the stolen hard drive and broadcast to the world via Youtube.

In the unavoidable fallout, many place the blame on M (Dench), leading to a strong push for her “retirement”. Even once they finally identify the enemy, the cyberterrorist Silva (Bardem), the question of how to stop him, or what he even wants, still remains. Bond, with the help of young tech genius Q (Whishaw), is sent to find and neutralize the threat, the likes of which MI6 has never seen before.

Review: It has been four years since the release of the last Bond film, Quantum of Solace (2008), and fifty since the release of the first, Dr. No (1962). And I must say, Skyfall is more than worthy of its golden anniversary release. While certain elements of the movie are reminiscent of classic Bond (the return of a rebooted Q, for instance), the overall tone and content suggest a new and exciting direction for the franchise.

Skyfall, much like Casino Royale (2006), provides a much deeper, realistic take on a character and a premise known for being campy. For the first time ever, Bond is portrayed as an actual person, with a past and a  questionable future. He faces his own morality, and struggles with the inevitable consequences of aging, as does M, who, while retaining her cut-throat, apathetic personality, looks unquestionably aged and frail. Even MI6 is looking worse for wear. Enter, Silva. The new Bond villain is everything a villain should be: brilliant, demented, and haunted enough to inspire both sympathy and horror. To get an idea of Silva as a villain, just imagine the Joker, except tech savvy, with a much clearer goal: revenge. Actually, Skyfall has a striking number of similarities to Christopher Nolan’s Dark Knight trilogy, the villain simply being the most obvious of them (which is rather interesting, considering Nolan has claimed serious interest in being a future Bond director). Really, though, I think the similarities between the two come down to this: both are reboots of long-standing franchises infamous for excess, attempting to re-tailor them to a modern audience, and both are successful.

Without the restraints of Ian Fleming’s novels,  (Skyfall, unlike Quantum of Solace and Casino Royale, is not named or based one of Fleming’s novels or short stories), the film truly brings Bond to the present day, where a  mastermind can cause worldwide chaos without even walking out his front door. In addition to redefining Bond, Skyfall shows just how much espionage must change to suit the modern world, because just as Ben Whishaw’s modernized Q (now more of a hacker than an inventor) says to Bond, “I can do more damage on my laptop in my pyjamas than you can do in a year in the field”. But Skyfall makes a good case as to exactly why “old-fashioned” espionage is still necessary in the modern world.

Skyfall, just like James Bond’s hobby, can be summed up in one word: “Resurrection.”

An intriguing title card after the classic gun barrel sequence but before the credits announces “Bond will return,” but I think it’s safe to say he already has.

Oscar Buzz: While Skyfall is more than deserving, this year is proving to have more than its share of award-worthy films, particularly in these last few months. But only time will tell.

Be the first to comment on "Film Review: Skyfall"