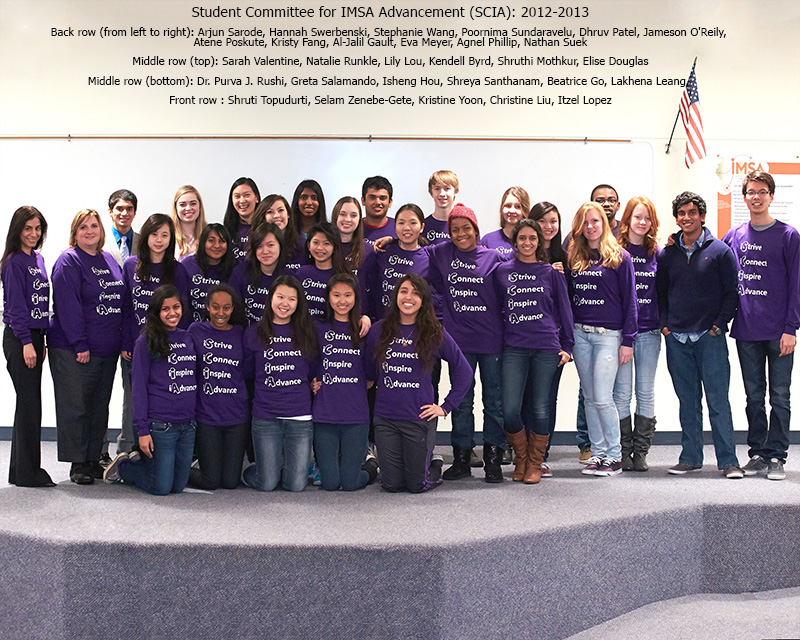 The current SCIA (Student Committee for IMSA Advancement) 2012-2013 board along with next  year’s board-elect have been working hard to establish an organized structure that best defines and represents their vision for the future of SCIA.

Traditionally, SCIA has been led by two presidents who each focus on either the legislative branch or alumni branch. Currently, Nathan Suek (’13) acts as Alumni/Donor President and Eva Meyer (’13) is a Legislative President. The new power structure, that will be present in the 2013-2014 academic year, consists of four hierarchical positions: President, Legislative Director, Alumni/Donor director, and Marketing director.

SCIA President-elect Jameson O’Reilly will be stepping up to the plate. His responsibilities encompass organizing meetings, overseeing the duties of the three directors and the other SCIA representatives, and facilitating  ideas.

The Legislative Director, Shruthi Mothkur, will be tasked with organizing the visits of the legislators.The Alumni/Donor Director, Shreya Santhanam*, will organize the visits and events that involve IMSA alumni and donors.

The newly created position of Marketing director, Stephanie Wang, applies further cohesion and exposure within the IMSA community. She will be in charge of bringing greater visibility to the IMSA campus through SCIA by first bridging the gap between the two, a concern brought up by the current board members.

The application process of selecting a new SCIA representation has just wrapped up. The IMSA community wishes next year’s SCIA board members the very best in their endeavors to redefine SCIA for the coming school year.

*Shreya Santhanam will be replacing the previous Alumni/Donor Director-elect.

ABOUT: Student Committee for IMSA Advancement (SCIA) is an influential club in the integration of the IMSA community and the outside world. The organization is founded on the basis of strengthening bonds with the outside community, receiving funding from legislators, and reconnecting with IMSA alumni. Currently Alumni/Donor President Nathan Suek mentions that SCIA is “a critical organization” if IMSA is “to be properly funded. In the past years, the association has been moving towards organizing a modern system to better accomplish their mission. The vision of SCIA is shifting towards connecting more with the student body. While maintaining funding, SCIA plans to have a more direct impact on the students’ lives.

Senior Speaks: Behind the Scenes

Be the first to comment on "New Vision for SCIA"