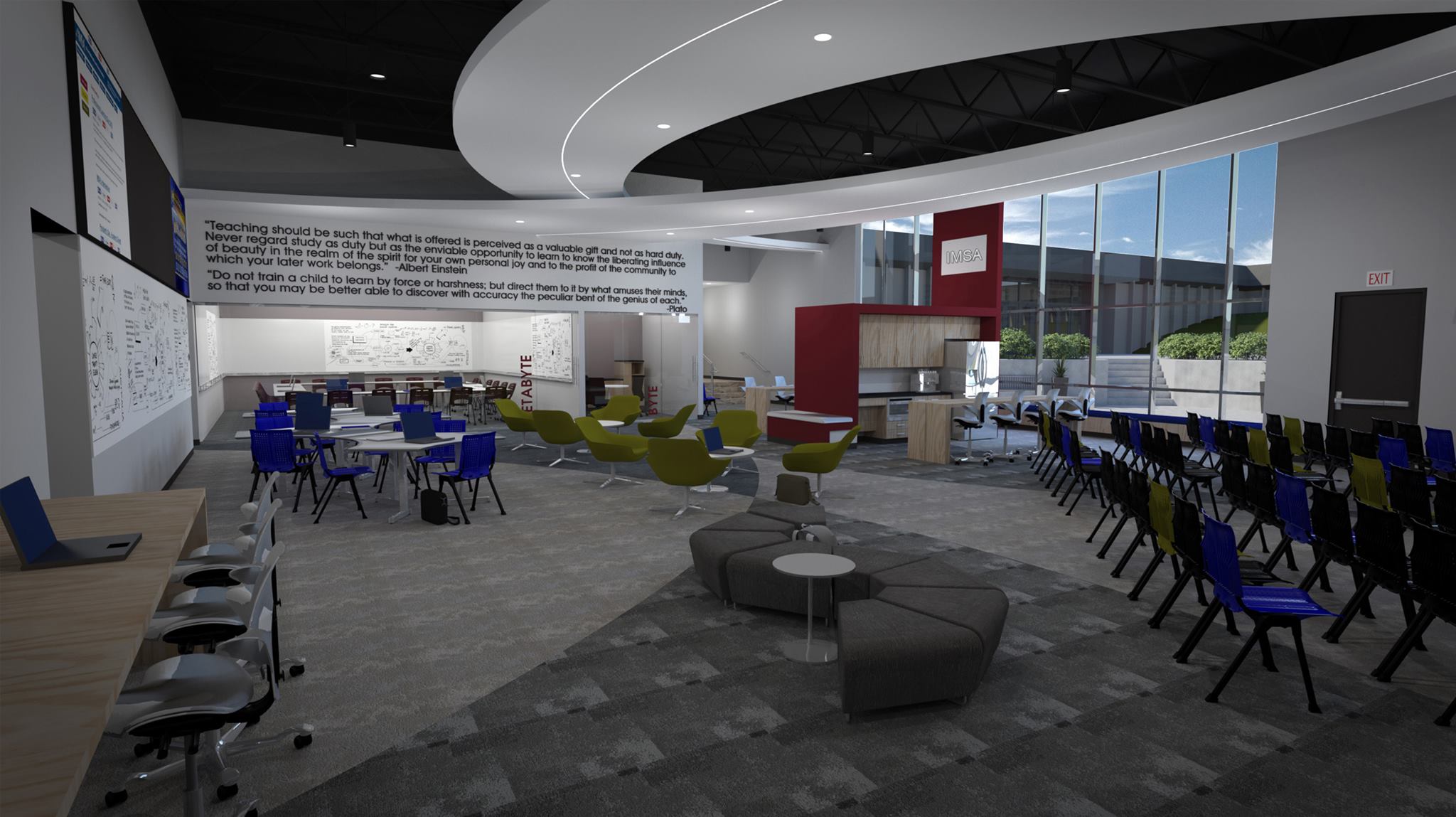 This past Wednesday, Britta McKenna, The IMSA Board of Trustees, and StudCo President Vinesh Kannan unveiled the name of our school’s planned Innovation Hub — now called IN2. Standing for INnovation, INquiry, and more, IN2 rolled out to a party full of renderings and branded cookies. The question, then, seems to be “What exactly is an IN2 or an innovation hub?”

Well, according to Google, it’s a blog, a radio station, and a startup incubator. At IMSA, though, the name takes a different face. To find out what it will look like and the purposes it’s intended to serve, we talked to the IMSA faculty responsible for this project, Britta McKenna.

The largest asset to this project seems to be space. Space that can be used and formed according to whatever project students are currently working on. According to Britta, IN2 should “tell a story about how ideas develop” and “engage people as collaborators.” IN2 features a large open central commons area, with conference rooms lining the walls, at 500 square feet in total, replacing what is now KI and the Student Union. The whole area will be lined with whiteboards and monitors, tools for helping students visualize their ideas for themselves, and others.

IN2 will be equipped with many cutting edge tools, design elements, and features. There will be six 3D printers available for student use. In addition, there will be an “idea bar” — a space for people to discuss their ideas with “guest baristas,” who will be members of the community and IMSA staff who are interested in helping to foster the growth of ideas in this new space.

Student and member of the newly formed Maker Squad, Zach Ungerleider, says that “The most important part of IN2 is learning that failure isn’t always a bad thing… we want students to realize that unlike grades, a mistake here doesn’t mean the end of a project. It means the start of a better one.” Maker Squad is a group of trained students knowledgeable in the use of the 3D printers.

All of this sounds fairly impressive — and it is — but its far from finished. While IMSA received the generous donation from Steve Chen, the project is still $900,000 of fundraising short of completion, and will take some time to construct. If all goes “smooth as silk,” according to Britta, it could open in May of 2016. She also reminded us that few things ever go ideally and that she is looking to a hopeful ribbon cutting for the beginning of the 2016-17 school year, IMSA’s 30th anniversary.

IN2 and its programs are currently housed in a smaller form, almost like a prototype, in the Energy Center. The room is usually open during the day and Britta is almost always around and willing to chat and hear anyone’s ideas about the Energy Center or IN2.

And to close on a final, lighthearted note, our StudCo President’s opinions on the new name for the innovation hub: “The reason I like it is that it sounds like a rocket engine.” “IN2 armed!”

OP: The Truth about the Innovation Hub

Be the first to comment on "Stepping Into IN2"