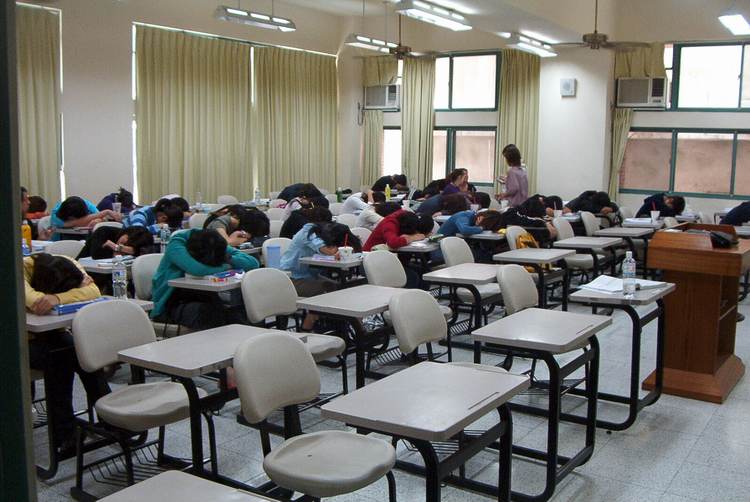 My phone-taking habit continued from there.  It was almost like a game:  see how many screens you can spot once Dr. Eysturlid gets five minutes into his lecture!  The problem was that no matter how many people I warned to “put it away, or I’m going to take it,” or how upset the few people whose phones I actually took looked, juniors continued to text.  Some of them even texted in the much smaller and more personal breakout sessions, which my co-facilitator and I had put a lot of effort into.  Anyone who’s had Ethics knows that not all sessions are good and not all of Dr. Eysturlid’s jokes are funny, but that doesn’t mean that students should completely write off Ethics.

Here’s the thing: this isn’t just about Ethics.  As an Ethics facilitator, this is the example of apathy on the IMSA campus that most affects me, but the key point is that apathy is rampant here.  Now, I’m not saying that nobody here cares about anything because that’s obviously not true.  We have a lot of really passionate student leaders who care about what they’re doing with different clubs and organizations.  The problem is that, even though I think everybody on this campus is passionate about something, whether it’s LoL or SocEnt, students here do not appear to have enough respect for each other to try and understand the passions of others.  I know for a fact that one of the students I had for Ethics who was most vocally against Ethics and everything it stood for is a passionate leader of at least two clubs on campus.  Another student who used her phone repeatedly during a recent breakout session heads another club.  Even though these students must have understood many of the different trials associated with student leadership and getting other people excited about something they feel passionately about, they couldn’t extend this knowledge to the Ethics session that I was excited about.  There’s a missed connection somewhere here where people don’t realize that they are to others what others are to them.  The president of Club Y is still just a person who comes to or blows off a meeting of Club Z.

I know that this isn’t an issue that’s just going to change overnight.  Believe me, I know that you have homework.  I know that the main building seems ridiculously far away and that cultural club’s event seems ridiculously unimportant when you are cozily chatting with your friends in the halls.  I know because I’ve skipped club meetings and missed events that I was interested in because maybe I just wasn’t… interested enough.  But what I’ve begun to realize during my senior year is that by doing so, I was not only hurting my peers who spent so much time planning these events but also myself by not giving myself the full opportunity to learn from the people around me.  Even the things that are mandatory that you really have no interest in – someone cares about those things.  For example, LEAD facilitators spend hours and hours a week working on what they’re going to do in their sessions.  One facilitator I talked to said she spends about 3-5 hours a week on LEAD directly and more than that on LEAD-related projects.  This is a huge time commitment and obviously represents how much this facilitator cares about what she is doing, but she has still received mixed responses from students.

I don’t think that this is the IMSA we want.  We came here because we are passionate, because we wanted to escape something or come to a place where we would be accepted for the nerds we are.  And that’s why I want to address every IMSA student, not just the student leaders, when I say: listen up!  Not just to me, or whoever your Ethics facilitator is, but to everybody.  When somebody gets that look in their eye – the one that you know means a full-on monologue is coming – don’t avoid it or check out; listen.  When your roommate wants to go to a Med Society event or check out what Spark’s doing on a Thursday night, tell them to go and maybe even tag along.  I will continue to take cell phones during Ethics, and I will continue to plan my breakout sessions in extended detail because I believe this: that if you learn to listen to people who are passionate about what they are doing, you’ll start to care, at least a little.  In doing so, you’ll bring back the passion in yourself – the passion that put you on this crazy IMSA path.  It’s just a part of what we need to be the IMSA we want to be, but it’s a necessary part.

Be the first to comment on "Can’t Get No Respect…"