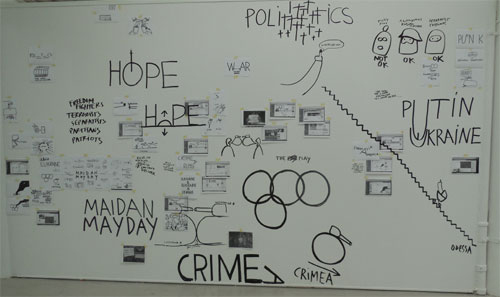 Over the summer, I was incredibly fortunate to have the opportunity to visit central Europe. Together, my mom and I spent 10 days checking in and out of hotels, seeing various countries in an awesome whirlwind of food, culture, and music.

6 days into our trip, we finally arrived at the place I had been dying to see: Vienna, Austria. The city of music. Beethoven, Mozart, Brahms, Mahler, Schubert, and more famous composers spent a majority of their time there, performing and writing music. It was incredible. Everywhere I walked, there was some quaint little cafe, some ornate stone building, some incredibly talented street musician.

My mom and I decided to go on a museum spree. We traveled through the House of Music, Austrian National Library, Globe Museum, and, most notably, the Albertina.

The Albertina is one of the largest art museums in the world, serving as a home to approximately 65,000 drawings and over a million prints. We visited as the museum housed their most recent exhibition: Drawing Now 2015. There, they featured pieces of modern drawings and sculptures. The museum describes the exhibit as an “attempt to take stock of what drawing means or can mean today . . . [it] illustrates the broad spectrum of present-day tendencies of drawing in art.”

Up until that point, my impression of modern art was dozens of curators photographing and praising a worthless piece of solid blue canvas. Only then, did I discover that it was something entirely different. As we ran out of time at the museum, my mom had to push me to breeze faster through the exhibit as I found myself wanting to examine every mark on every mural and ponder the meaning of it all. It was an awakening.

The piece that struck me the most was by an artist named Dan Perjovschi. It covered the span of an entire wall, and consisted of seemingly meaningless pictures and phrases: A closer look, though, revealed that each drawing has some meaning. They often allude to some political issue or satirize some action of man. In the picture above, it is difficult to see, but one of the scrawled little messages is this: World War I, World War II, World Wide Web. We’ve transcended guns and tanks, but we have in no way escaped violence through digital interaction–we can hurt each other with words, with pictures, and the constant exchange of information can seem so remarkable that it is scary, not unlike a war. On top of that, one could consider the war on hacking and security breaches. It seems like such a simple picture, but it manages to retain a powerful message.

I looked at Perjovschi’s other work, and much of it is of a similar fashion,  relating to issues of race, class, government, and more: In the top middle is the world “politics,” except the T is written many times and in the shape of a cross. Perjovschi communicates in this drawing a message about the separation of church and state. By illustrating the two in one word, he shows how the two can become intertwined despite attempts to keep them apart. In the middle right, there are also the words “Putin” and “Ukraine.” The U in Putin droops downwards into the U of Ukraine, invading its space and hinting at the Russian annexation of Crimea being an intrusion to the Crimean people.

Putting these messages in such a simple way allows all people to comprehend. You don’t have to be a scholar; your English doesn’t have to be that good. The themes are universal.

These are only a few examples of Perjovschi’s work. Perjovschi himself is only one of many modern artists who implement important messages in a unique, creative way. Seeing some of it in person was something that totally changed my opinion on modern work.

It wasn’t just random paint splattered on the wall; it was politically charged with the issues that plague us. It wasn’t just black-and-white marker; it was simple and plain, like we should be to one another. It was clever; it was profound; it consummated painful situations in a way that was endlessly captivating.

Pictures and information from:

IMSA Does Not Care About Your African Identity

Be the first to comment on "Albertina: Modern Art and Why it Doesn’t Suck"