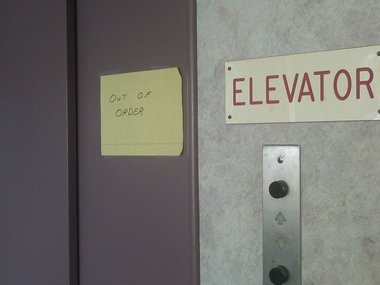 As of Friday, October 23, 2015 the indiscriminate use of the IMSA elevators in the residence halls has come to an abrupt end. Students were informed via email, courtesy of Area Coordinator Eric Hetland, who dubbed it a “small change… in the residence halls.” However, too many students who took joy rides or were simply too tired or indolent to take the stairs, the shutting off of elevators is significant change to the dynamics of their IMSA lifestyles. This change does not entail absolute cessation of elevator use; they can still be used upon necessity, as Eric wrote: “Students and parents who need to use the elevators can see the RC on duty in the office, who can then turn the elevator on for their use. After this use has finished, the RC will turn the elevator off once again.” Although seemingly tedious, it has become a security necessity.

Based on conversations with 05A RC Jeremy Johnson, each hall had its own motivation for discontinuing unfettered elevator use. There are rumors that an 05 incident had to do with this change. However, Eric wrote the elevators were shut off “In an effort to maintain an effective level of supervision in this area.” This decision was apparently made because the current surveillance system does not capture the upstairs bridge. Hence, someone could enter a hall and roam the upstairs undocumented. Students could also participate in activities that would normally yield severe repercussions were they captured on camera. Nevertheless, while this new system was described to students at ten check by their RC’s, details about the decision-making process were not mentioned. In fact, each RC informed their students that if they are absolutely trapped (i.e. without a fob or phone) on the upstairs bridge when an RC is not in the office, they must wait until security personnel reaches them during rounds (if no other student sees them), whereas before they could take the elevator downstairs and exit the hall, seeking another student for help. Although unfortunate and time-wasting, waiting in such a scenario would be a student’s only option.

Questions remain on this subject: Why was this change made now? Did Student Life abruptly realize surveillance was lacking upstairs after all these years? Will surveillance be installed upstairs? If so, when? And if surveillance is in place, will the elevators be returned to active status?

Trying to Relax in the Relaxation Room

A Quick Look at the 2016 Mental Health Initiative