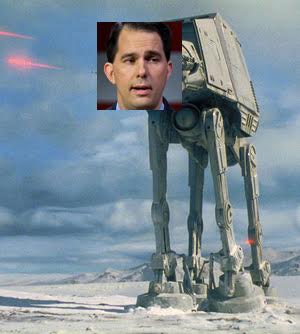 Recent presidential campaign-dropout and Wisconsin Governor Scott Walker signed a bill last week that effectively protects him and other public officials from investigation into political corruption by something called the John Doe law. This law gives prosecutors the ability to conduct secret investigations by executing search warrants and making people obligated to testify.  It gives judges permission to compel people to come to court and testify.

As Milwaukee County Distract Attorney E. Michael McCann puts it, “For over 165 years, the John Doe statute has served our state well and has been particularly effective in recent decades in bringing to justice legislators and other public officials who have committed crimes in public office.” This law has been very effective in rooting out corruption in public office. Walker himself has been involved in two John Doe investigations. The more recent one, which involved claims of illegal campaign fundraising, was shut down in a close and controversial decision, in which justices whose own election campaigns were backed by the same groups in question found nothing illegal about the fundraising.

This new bill is, simply put, ridiculous, and a reflection of the sway big money has in modern politics. Without this law, public officials will be able to easily get away with bribery, illegal campaign finances, and any number of election law offenses. Even worse, Walker is also campaigning to remove Wisconsin’s Government Accountability Board, which keeps close tabs on elections and enforces laws regarding lobbying, elections, and ethics. He is even trying to remove the state’s campaign financing regulations. This means that corporations and other interest groups would be able to spend as much money as they please in Wisconsin politics.

It’s frightening that an elected official can get away with signing a law that essentially gives him added protection from the law and is now moving to allow more money into politics. Walker and his allies in the Wisconsin government have called the John Doe Law a partisan witch-hunt. If anything, Walker’s legislation is a sign that we need more tools to combat corruption. Perhaps he thinks that giving himself added protection from the law around the time his campaign is being investigated doesn’t make his suspicious. Hopefully the rest of Wisconsin doesn’t think so.

Be the first to comment on "Scott Walker Strikes Back"