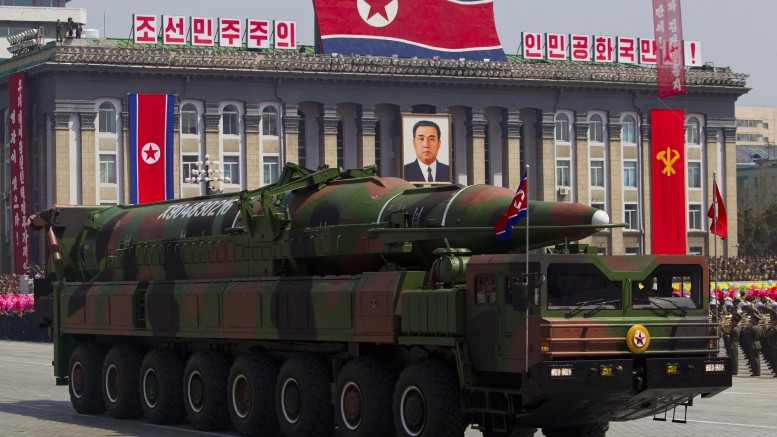 In this Sunday, April 15, 2012 file photo, a North Korean vehicle carrying a missile passes by during a mass military parade in Pyongyang's Kim Il Sung Square to celebrate the centenary of the birth of the late North Korean founder Kim Il Sung. North Korea has moved a missile with "considerable range" to its east coast, South Korean Defense Minister Kim Kwan-jin said Thursday, April 4, 2013 but he added that there are no signs that Pyongyang is preparing for a full-scale conflict. The report came hours after North Korea's military warned that it has been authorized to attack the U.S. using "smaller, lighter and diversified" nuclear weapons. It was the North's latest war cry against America in recent weeks, with the added suggestion that it had improved its nuclear technology. (AP Photo/David Guttenfelder, File)

Perhaps predicting another world war is an exaggeration, but that alone won’t negate North Korea’s threat that it would make a “preemptive and offensive nuclear strike” on Monday, March 7, 2016 in response to the joint American and South Korean military exercise.

Annually, the United States and South Korea (or the Republic of Korea) participate in the Foal Eagle Field Training Exercise (FTX), an endeavor overseen by the Combined Forces Command. As one of the largest military exercises in the world, the Foal Eagle serves as a defense training maneuver, security enhancer, and military exercise for American-Korean cohesion and stability. Unfortunately, it is also an annual source of tension between the Democratic People’s Republic of Korea (DPRK) and South Korea and the US. It does not help convince the DPRK of the program’s innocence even though that a key distinction of the Foal Eagle is that it is a defensive maneuver (meaning it exclusively serves as a test of the ability of South Korea to defend itself). Nevertheless, the exercise serves other goals, too, including deterring war and challenging North Korean censorship and autocracy. Although Foal Eagle itself began in 1997, the Reception, Staging, Onward movement, and Integration (RSOI) exercise of South Korea merged with the latter in 2002 (announced in 2001) as they shared similar purposes. In 2008, RSOI changed its name to Key Resolve after accommodating newer groups of the US Air Force and Marines. Generally peaceful acts that facilitate positive international relationships, these joint military exercises, which occur annually in various South Korean areas, have in turn spurred annual threats from the DPRK.

The National Defense Commission of North Korea stated in a state-run Central news Agency: “As the joint military exercises to be staged by the enemies are regarded as the most undisguised nuclear war drills aimed to infringe upon the sovereignty of the DPRK, its military counteraction will be more preemptive and offensive nuclear strikes to cope with them.” In response, the United States called on North Korea to refrain from any violent or extreme reactions and instead direct its energies towards meeting international commitments. The US also affirmed in a statement that it was closely monitoring its South Korean allies in order to protect them.

Although these threats are an annual routine, this year may be a bit different. As recently as March this year, the UN Security Council voted to impose a series of sanctions because of North Korea’s recent nuclear test and missile launch, both violations of international regulations and preset sanctions. The purpose of these sanctions was and is in the best interest of global safety because they serve to sever economic resources that the DPRK needs to execute a very potential nuclear and ballistic missile program. North Korean news agencies then called the sanctions “gangster like” but Kim Jong-Un said the sanctions were nothing that could deter his country from its ultimate goal-whatever that may be. Therefore, South Korea sees its northern neighbor as its largest threat especially since the DPRK recently “test” fired six short-ranged missiles in the direction of South Korea. Hence, in defense, South Korea and the US are developing counter ballistic machinery to combat imminent nuclear threats.

Yet, perhaps the DPRK perceives the military exercise as a threat in the same way the US and South Korea view its missile tests. After all, the two exercises (Foal Eagle and Key Resolve) for this year, scheduled to run on April 30th, include 17, 000 US Forces and over 300,000 South Korean troops. The world at large thinks North Korea is preparing itself for nuclear war while the SPRK in turn declares nothing of the sort. Nevertheless, the international community should not wait until it is too late to determine the truth. Peace can be affirmed through peaceful means, and must be to ensure a peaceful future.

Be the first to comment on "World War III"