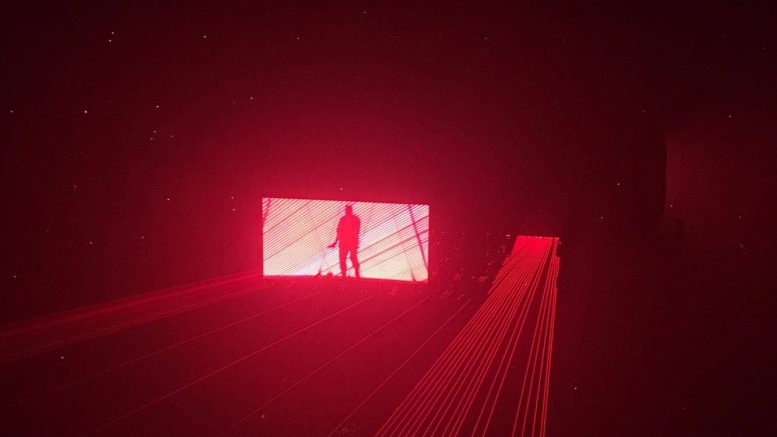 After an hour of keeping the audience waiting, Kanye West erupted from the stage at Chicago’s United Center last Friday night. Opening with “Father Stretch My Hands Pt. 1”, he immediately had every audience member up off of their feet, especially those in the mosh pit directly below him.

Rather than sticking to the front and center, Yeezy decided to switch things up a bit, catering to audience members in every corner, literally. He got close to the crowd with a platform suspended from the ceiling, hovering directly above the audience. Orange lights illuminated those below him, and they all seemed to feel pretty liberated.

His vocals and rhymes exceeded expectations, and were nothing short of extraordinary. He performed fully and strongly for his fans, using auto-tune tastefully for his “808s & Heartbreak” renditions. Nonetheless, on occasion, his experimenting went too far. In an attempt to re-hype the audience, West repeated the beat drop of “Famous” and “All of the Lights” three times over. By the end of the third segment, fans were ready to move on.

While the sound quality and bass were strong enough to stay with audience members after the concert, the graphics and lighting failed to have the same effect. The jumbo-tron depicted a rough silhouette of the man himself. He blurred in and out of vision, accompanied by streaks of light and unfocused video. Rather than producing the illusion of a laser-light show, the graphics resembled those of an iTunes visualizer from 2008.

Ultimately, the graphics failed to do justice to the impeccable music itself. Halfway through the concert, he slowed things down, taking a moment to remember his mother, and praise his child. Although “Only One” was placed abruptly, it successfully brought tears to eyes of the audience members. He then easily transitioned into “Flashing Lights ft. Dwele”, taking the audience on a trip back to Graduation in 2007.

With “Stronger”, “Touch the Sky”, and “Good Life”, Kanye brought sweet nostalgia to every audience member, performing those tracks as if they were as good as new. To much disappointment, Mr. West failed to perform “Homecoming”, a song undoubtedly expected for his hometown of Chicago. Unlike other Chicago rappers, Kanye failed to hold chi-city to a higher standard with this performance.

West closed with “Ultralight Beam”, a seamless transition out of his throwback tracks and into a cool-down for the audience. The entire stadium went dark, allowing fans to enjoy his sounds, and ween off of his presence. By the time the lights went back on, his floating stage had descended, and the man had gone without notice.

Can we get much higher? By the looks of it, Yeezy has already taken us pretty high.