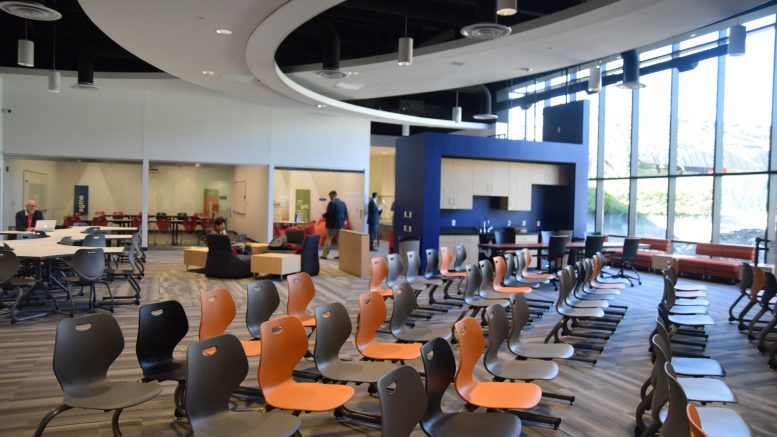 A picture of IN2 setting up to host an event. Photo Credits: Michelle Zhu

A huge thank-you to Britta McKenna, Carl Heine, Kathryn Downey, Neil Patel, and Claudia Zhu for their time and insight. I’ve learned that no matter what you’re into, there’s sure to be something for you at IN2.

Everyone has walked past it several times over the course of the past year, questioning why the Student Union was being torn down, but never thinking to ask what all the hype was about.

Now, it is unofficially open! Meet IN2, the culmination of hard labor, countless blueprints, years of planning, and ambitious visions. “Funded by Steve Chen [IMSA alumnus and co-founder of Youtube], it’s the first innovation hub for high school students in Illinois, and as far as we know, in the country,” said Claudia Zhu, board member of Teen STEM Café. IN2 is the center for inquiry and innovation (hence, IN2, pronounced ‘into’), entrepreneurship, student-proposed projects, and so much more. “It’s not a ‘big fancy room’… rather, IN2 is meant to provide a framework, the resources, and the guidance for people to do projects, discuss and develop startups/products,” Neil Patel said, board member of Club Terra, a club run through IN2.

It all started three years ago when IN2 was envisioned by IMSA staff members Britta McKenna and Carl Heine. “We hosted intersessions where we traveled from coast to coast, starting with Silicon Valley and Stanford, to Chicago, Rockford, and Peoria—I went to Boston myself—to study the best practices from successful innovation centers in universities,” Britta McKenna said, the director of IN2 and Chief Innovation Officer.

Afterwards, IMSA students formed teams to design the IN2 space and hand-pick the technology and the furniture. “What you’re seeing today is IN2 imagined through a student’s lens,” Britta McKenna said. Through our imaginings of an innovation center reflective of the 21st century, we’ve upheld our classic mission statement of advancing the human condition.

But first came IN1, the minimum viable product! Complete with cool gadgets and innovative technology like 3D printers and Google Cardboard, IN1 was developed as a prototype for testing out ideas.

“IN1 was the ‘incubator space,’ and we wanted it to be bursting at the seams with projects and ideas, so we could grow into this space,” Britta McKenna said, gesturing toward IN2. Now, in 2016, Betty Hart, IN2 program manager, organizes all of the student-led clubs and programs that are run from IN2: Teen STEM Cafe, MakerSquad, Club Terra, TALENT (& eleMENT), various launchpads like DropDot and Virtual Reality, and even more. “IN2 is doing this new thing called MakerMob, which is basically the ‘umbrella’ term for anything from submarine building to a 3D printing club. Aviation will be merged into this, and we teach people how to build and fly quadcopters,” said Kathryn Downey, former board member of Aviation Club.

The official opening (the ribbon-cutting ceremony) is projected to be this upcoming winter, but as any project with “innovative” in its name, IN2 will never truly be finished, promises Britta McKenna.

“It’s not going to be limited to this space,” said Carl Heine, the director of the TALENT program, on IN2’s future. “This is a location, but the cool things will be the problems solved, new businesses started, the solutions found for the global grand challenges, and that’s what’s going to change the world.”

Be the first to comment on "The Unofficial Opening of IN2"