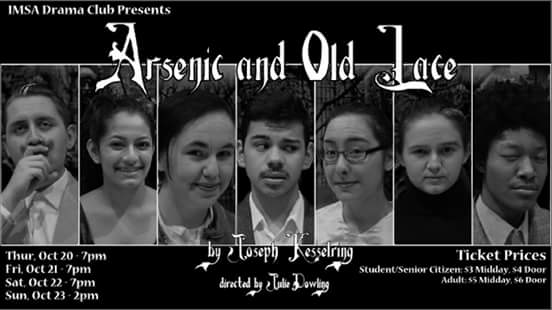 Need some spooky entertainment before Halloween? Drama club’s fall show, Arsenic and Old Lace, offers the perfect mix of comedy and chaos. The play is a thriller comedy and has a dynamic plot full of love-sick adults, homicidal murderers, and crazy families.  The play debuts on Thursday, October 20th, at 7:00 p.m. in the auditorium and also runs on the coming Friday, Saturday, and Sunday at 7:00 p.m.

While students do attend the school play for their own leisure, many are not aware of the scrupulous planning that occurs behind the scenes. Spencer Adams (’17), Drama club’s marketing director explains that the buildup to premier day requires hours of learning scripts, auditions, practice on set, dress rehearsals, etc.

Spencer has acted since 5th grade and has been involved in drama club for all three years at IMSA. He has acted in plays every year and directed an act last year. Spencer says, “Whenever we have to memorize lines, I feel like I’m literally dying, but the type of stress from memorizing lines is overwhelming yet…relieving. I love memorizing lines. I love being on stage.”

Drama Club’s Play Writing Committee actually choses all the plays for the current academic year back in March and April. Arsenic and Old Lace has 16 actors and over a dozen techies running the production. For eight straight weeks, all the cast members worked two hours a day Sunday to Thursday.

Arsenic and Old Lace is directed by IMSA math teacher, Julie Dowling. The set was designed by Mark Fournier (’16) and completed in 7 weeks. The most laborious time is the week of the play, referred to as “Tech week”. Tech week encompasses an eight hour rehearsal on Sunday and five hour rehearsals running on weekdays until premiere. Spencer explains that there’s not too much down time because actors and techies have to get used to the stage, time their movements precisely, be accustomed to sound and light settings, get fitted for costumes, and more.

Eight weeks of hard work went into the play, and it all paid off this weekend. Great job to all the students who performed and worked behind the scenes!