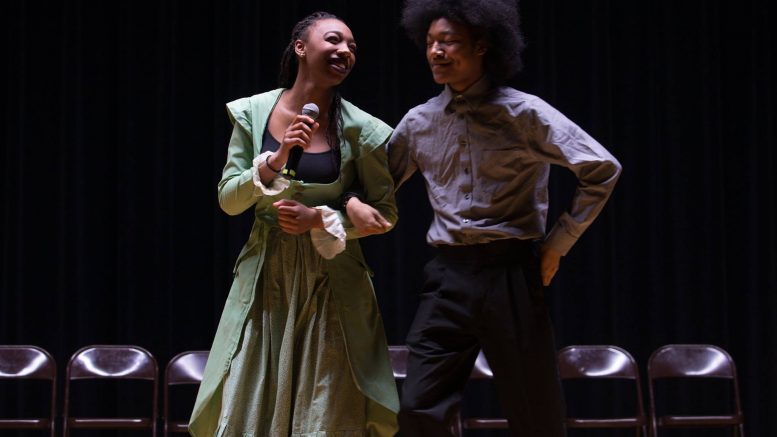 Gracing February with its arrival, the Harambee show of 2017 did well to make its mark, putting on a show with its impressive allotment of poems, acts, and dances. Yet even in light of the entertainment value, the play did not pass up the opportunity to put forth its message, a staple maintained by the narratives of each and every culture show.

The poetry was as poignant as it was powerful, conveying the ponderings and pains of a select number of artists. Yet at the same time, the words were built around a theme, an intent. In simple words of Harambee co-director Jaelyn Evans (’18), Harambee is “a show celebrating African and African-American culture which also served to highlight the issue of colorism within the African American community through the play Color Struck by Zora Neale Hurston.” It is some right a social critique of a dated time, yet its relevance to the present day is a statement all on its own—Harambee’s statement in particular.

Harambee co-director Dawn Triche (‘18) says “the overall theme of Harambee is joining together. Which is actually what Harambee means. It’s a way that we can get a bunch of people to come together and put on a show that represents us and our culture.” In a certain sense, it is, in fact, a meeting ground of sorts, a “very unique opportunity that we should all experience at least once.”

It only goes to show that the program’s pieces do well to prove these claims right, entertaining and educating all at once. Even as the dances serve as engaging displays of African and African-American culture, the show’s play goes in concordance with the unifying yet introspective theme just as well as its poems do, a plot centered around a couple dealing with the issues of colorism in their relationship with each other and others.

In the mind of Emma, our protagonist of sorts, lighter skin is a trait to be envied as opposed to her own darker shade. It is a notion that dominates her mentality, breeding anxiety for her partner’s faithfulness and animosity towards her competitors. Without a word from any of her so-called adversaries, Emma convinces herself of defeat before anyone could even say otherwise. In the words of John, played brilliantly by Diego Alanis (’18), “she so despise[d] her own skin that she can’t believe anyone else could love it.”

The story, ironically, works like a mirror. Hidden assumptions and internalized beliefs hold much more weight than one may think. After all, it is often times what occurs below the surface—within the subconscious—that determines how we feel and ultimately how we act. It is a lesson for people of all shades, backgrounds, religions, and creeds. It seems to speak of how we all should pay mind to the notions that we let in. They often are the advisors that inform our assumptions and misgivings more often than not. Any extreme idea, a total blanket assumption about anyone or anything, may just be one to be avoided.

Unless it has something to do with a good show, great food, and an even better community. Who can say no to that?

To watch the Harambee 2017 show online, feel free to click the links below and enjoy.

Be the first to comment on "A Collage of Colors: Harambee’s Intent"