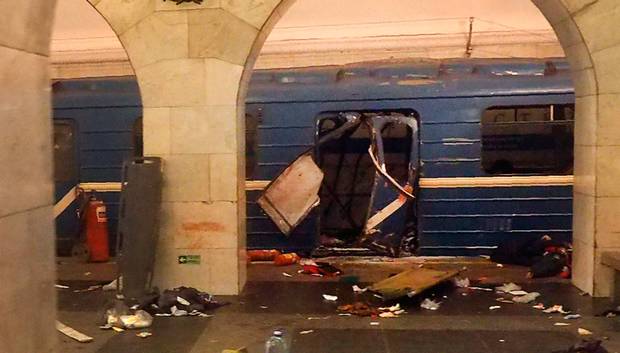 ST. PETERSBURG, RUSSIA – Just before 7 a.m. this morning, a blast in a train car killed at least eleven people and injured another forty-five.

The train had left Сeннaя Плoщадь (Sennaya Square) shortly before the bomb exploded, but the conductor did not stop and instead continued onward to the Технологический институт (Technology Institute), a move praised by Russia’s Investigative Committee for facilitating the speedy arrival of help and subsequent evacuation of passengers.

Hours later, police found and deactivated a larger explosive device that had been disguised as a fire extinguisher, located at the nearby station Площадь Восстания (Uprising Square). The state media suspect that a suicide bomber planted the explosive before boarding the train and detonating a smaller one. 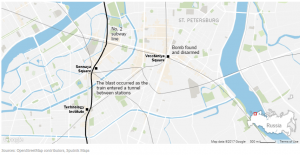 A map of the explosion (New York Times)

“I appeal to you, citizens of St. Petersburg and guests of our city, to be alert, attentive and cautious, and to behave in a responsible manner in light of events,” he stated.

The president, Vladimir Putin, was a few miles away when the attack occurred, a situation which some have argued was no coincidence. Putin laid roses upon the makeshift memorial at the site of the explosion, and has vowed to do “everything to find out the causes of what had happened.”

“The government, both on the city and federal levels, will do everything to support families of the victims and injured,” he promised.

No group has claimed responsibility for the explosion yet, though the political factions have already started pointing fingers. For now, however, the president stated that “The reasons for the explosion are unknown, so it’s too early to talk about it…naturally, we always consider all options — both domestic and criminal, primarily incidents of a terrorist nature.”

Some residents feel alienated, as unconfirmed reports circulated that the suicide bomber might be from Uzbekistan or a neighboring country.

“This will be a stain on us, as though we are criminals,” said Rafael Artikov, a 57-year-old Uzbek, while mourning the dead at the station. “The goal was to frighten us and split us into separate groups…people look at me as though I am suspicious.”

Additionally, there is also political furor over how the attack might be characterized by opposing groups.

“If somebody announces that it is related to the Russian invasion in Syria, it would be a sensitive scenario for Putin, because the Syria campaign would lose support inside Russia,” warned Kirill Rogov, a political analyst.

Others have worried that the Kremlin may use the attack to suppress public protests.

“The actions of the authorities as far as any mass protests are predetermined,” tweeted opposition activist and former legislator Dmitry Gudkov, immediately prompting a sharp rebuke from the Russian state television.

President Donald Trump called the explosion “terrible,” further noting that “it’s happening all over the world,” while U.N. Ambassador Nikki Haley gave a statement on Twitter.

“We would like to extend our condolences to the people of Russia,” she wrote. “We stand with you on defeating these extremist groups who continue to cause senseless harm against innocent people.”

Be the first to comment on "Explosion on St. Petersburg Train Kills 11, Injures 45"