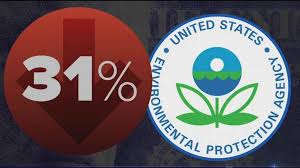 Among the US Science Agencies experiencing deep budget cuts is the EPA, with a 31% reduction to its current funding.

Inside the new Trump Administration’s first budget proposal are deep cuts across the board for numerous Science Agencies. The plan also lays the foundation for a broad change in US research opportunities, especially in environmental and climate programs in the country.

The proposed cuts would result in double-digit reductions in funding for the U.S. Environmental Protection Agency (EPA) and the National Institutes for Health (NIH). As one of the hardest-hit agencies, the EPA would face $2.6 billion in cuts, close to a third of its current budget, subsequently resulting in the potential lay-off of 3,200 of the agency’s staff. Similarly, the NIH budget would be cut by $5.8 billion, a loss of 20% of the agency’s funding. Other government groups like the Department of Energy and the National Oceanic and Atmospheric Administration (NOAA) would lose experience similar cuts in funding as well.

“Cutting [research and development] funding from our budget is the same as cutting the engines off an airplane that’s too heavy for take-off,” says Jason Rao, director of international affairs at the American Society for Microbiology in Washington, D.C. He believes that the greatest threats to the United States are those presented by infectious diseases, climate change, and energy production, all of which must be addressed with scientific research.

NASA would see a relatively smaller cut – a proposed 0.8% reduction in its budget. However, its Earth Sciences projects would lose $200 million, and its Office of Education would be completely dropped. Under the new budget plan, NASA’s planetary division would expect to gain the most, with its budget growing from $1.6 billion to $1.9 billion as the White House proposal looks to shift the research priorities of the agency towards “deep-space exploration rather than Earth-centric research.”

Nevertheless, Casey Dreier, director of space policy for the Planetary Society, argues that Planetary Science’s gain does not necessarily come at the expense of other divisions.

“On a certain level you have limited resources and you have to make priorities,” he says. “Some divisions growing while others shrink is common among different administrations.” Dreier, however, doesn’t support a cut in NASA’s total budget, noting that “NASA is given tasks by the nation. We need to give NASA the resources that will allow them to be successful.”

“Rumors are counterproductive,” says Waleed Abdalati, former chief scientist at NASA. He believes that researchers who are worried about the potential cuts to the Earth-science programs at research agencies “should advocate for what should happen…rather than complain about what hasn’t happened.”