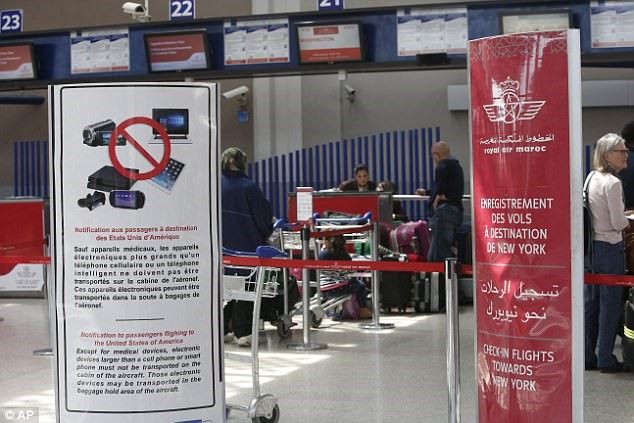 Passengers on flights into the US from nine airlines in the Middle East and Africa have been banned from carrying electronic devices larger than a cell phone in carry-on baggage. (Abdeljalil Bounhar/ AP)

Restrictions imposed on certain travelers from the Middle East and Africa have not been welcomed with open arms, both in the U.S. and the U.K.

New regulations have limited passengers from eight countries in the Middle East and Africa from carrying electronic devices larger than a cell phone in carry-on baggage.

U.S. officials say that the restrictions were based on intelligence that indicates terrorists now have access to airport screening equipment. With such technology in hand, terrorist organizations may be able to create highly disguised explosives for laptops and other electronic devices, an ability corroborated by intelligence that reveals ISIS members have already developed new methods to smuggle bombs onto commercial airlines.

“As a matter of policy, we do not publicly discuss specific intelligence information,” stated the U.S. Department of Homeland Security. “However, evaluated intelligence indicates that terrorist groups continue to target commercial aviation, to include smuggling explosive devices in electronics. As always, all air travelers are subject to a robust security system that employs multiple layers of security, both seen and unseen.”

Critics of these recent regulations argue that they have no basis in security, but instead amount to further religious discrimination. Amnesty International USA asserts that the January travel ban had acted “as shorthand for discriminating against Muslims, and we fear this latest decision may be no different. Muslims are once again left in the dark as the U.S administration piles up bans and restrictions against them.”

However, Robert Liscouski, an aviation security expert and a former Homeland Security assistant secretary for infrastructure protection, argues that limiting the ban to eight countries is logical based on the capability and locations of terrorist groups.

“These steps are both necessary and proportional to the threat,” says California Representative Adam Schiff, the top Democrat on the House Intelligence Committee. “The global aviation system remains a top target, and proper security requires that we continually adapt our defenses.”

Following in the footsteps of the United States, the U.K. has enacted similar legislation which limits electronic devices on certain flights from the Middle East and Africa.

“Things change all the time,” says Tom Hardiman, aviation security expert at English management consultancy Egremont Group. “This isn’t the first time we’ve had such a situation. We had a liquids ban that resulted in all bags being removed from the cabin, and thus the ban on electronic devices is a usual, proportionate response to a specific threat.”

“We don’t know whether the measures are right or wrong,” he said. “All I can say from experience is that it’s not a decision that is taken lightly – there are impacts on the industry, and on people’s freedom of movement. We have to be able to trust our government to get that information and respond in the correct way.”

Alumni Donations Took Me to Japan