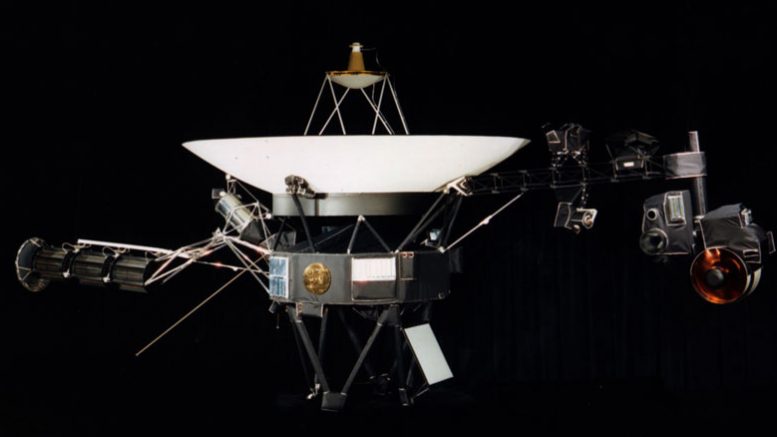 This is Nasa's picture of Voyager 1 in space. || Source: voyager.jpl.nasa.gov

NASA’s Voyager 1 set off 45 years ago and is still continuing its quest today. It set off on its journey in 1977 with a mission to travel by Jupiter and Saturn. Later, on August 12th, 2012, it hit interstellar space travel, becoming the first human-made object to do so. The Voyager 1’s overall goal is to take data from places that have never been explored before.

A reason many have heard of the Voyager 1 before is because it carries the Golden Record, a compiled list of messages and songs, meant to be a gift from Earth to the universe — in case there were any other forms of life out there.

45 years later, Voyager 1 is now three times the distance from the Sun to Pluto away from the Earth, making it the farthest away man-made object. Voyager 1 is still in the Sun’s gravitational strength and hasn’t left the solar system but many expect it to. Since the probe is more than 15 billion miles away, when it sends signals back to NASA it takes a total of 22 hours to reach them. This is important because in scientific studies today, we still use the high-resolution color photographs given to us by Voyager 1. 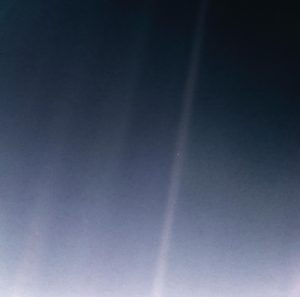 The final photo Voyager 1 had taken was the ‘Pale Blue Dot’ in 1990 when it was 6 billion miles away from Earth. || Source: NASA/JPL-Caltech

A part of Voyager 1 continues to be a mystery. Both the Voyager 1 and 2 are powered by a Plutonium power system. As the Plutonium breaks down, the heat that the Voyager is outputting drops and loses electricity. To counteract this, the NASA team decided to turn off all unessential components. One of these was the heaters that protect the Voyager in the extreme cold. In 2019, the five instruments had their heating turned off, but they are still working. This is surprising due to the fact that the Voyager is in temperatures far colder than what it was designed for.

The Voyager 1 has paved the way for many similar probes to follow its path. A panel for the Nation’s Scientific Priorities is proposing a plan to make an Interstellar Probe that would go to Voyager 1’s current position in a maximum of 15 years, taking about half the time Voyager 1 took. It will be able to take new measurements to use in new research and hopefully travel outside this galaxy. The Voyager 1 launch was a momentous occasion that collected 45 years of new discoveries in space. We owe many thanks to Voyager 1 and hope to celebrate its anniversary for many years to come.