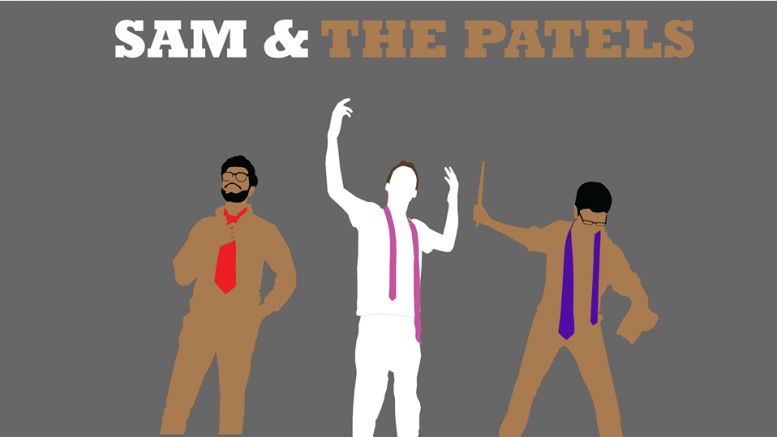 The Sam and the Patels logo was made by marketing director Timur Javid.

This past weekend, the debut album of IMSA’s very own Sam and the Patel’s was released. The group, made up of Sam Zelman (’17), Yugan Patel (’17), and Akash Patel (’17), intends to break out into the mainstream with this mixtape. Imagine capturing the soul of Michael Jackson, the style of Vitas, and the harmonies of Pentatonix, meshed into a brand-new style of music. The album, released on April 1st, is titled Journey, and tells a raw, honest story of life.

The group led with their hit single “Some Nights.” A cover of the band Fun., Sam and the Patel’s made it their own through unique vocal effects and a strong falsetto. However, a significant portion of the song is just normal singing, which the band seems to struggle with at times. After, “Freestyle 3”, a scat-based song, was released early, and completely made up in the moment of recording. The song is summarized at the very end, with the word “Wow.” While it is not a hit, it does make you want to hit something. Also freestyled in this mixtape are the songs “Journey”, “Freestyle 1”, “Bill Clinton”, “Dinka”, and “America (The Yöddele)”.

The album begins with “Journey”, and the listener must be immediately engrossed. The intro song shows the modesty of the group, even after all their successes. After “Some Nights”, the band’s other single is a cover of Lorde’s “Royals”, entitled “Royals”. The band tackles the song with a fresh outlook, adding in-song commentary and their trademark falsettos. During the bridge of the song, the group grants listeners a glimpse into the extent of their artistic talents. Also in the mixtape are covers of other famous artists including The Beatles and Kanye West. The only song without any of the Sam and the Patel’s is Hieu’s Interlude, played by the incredible Hieu Nguyen on a 5-year old’s recorder. The other of the two interludes is titled “Yugan’s Interlude”. To me, the song expresses the feeling you get when you were a toddler and strangers would smile at you for no reason.

In an age of musical mediocrity, Sam and the Patel’s have singlehandedly revolutionized the industry. Expected to go platinum hours after release, Journey is the best album I have ever heard. There is no telling what’s in store for these musical geniuses.