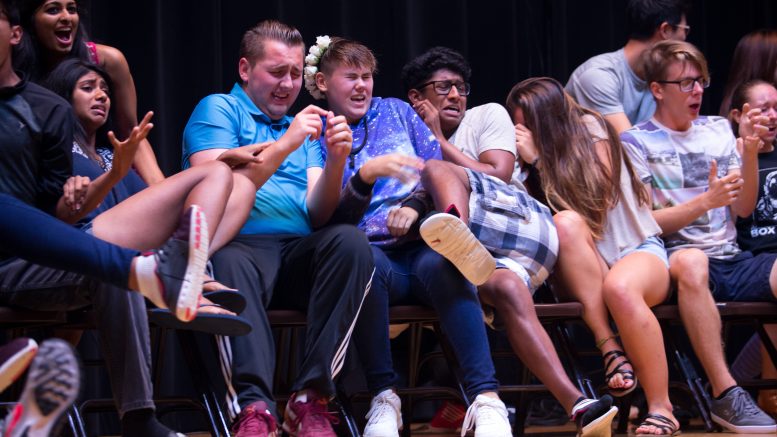 At the annual Homecoming week hypnotist show this past Friday, many excited students waited to see hypnosis in action, despite doubts about its effectiveness. As Wyatt Funkhouser (’20) said, “I don’t plan to volunteer to be hypnotized because I don’t believe it’s real.  I’m just here for fun.”

While commonly associated with a swinging pocket watch and a mystical power in control over the subconscious, hypnosis is really a psychological tactic that puts the brain into a relaxed, somewhat dazed, state.  Similar to sleep, a hypnotized person has slower brain wave activity.  This is why hypnosis is more effective if the patient is already tired.  It is also why hypnosis will not work if the patient is consciously resisting as there is too much brain activity to achieve the necessary relaxed state.  Thus, the effectiveness of hypnosis greatly depends upon the patient’s trust of the hypnotist.

In previous years, students were hypnotized into “forgetting that the number 4 existed, thinking they were zombies, or shouting out the names of vegetables as expletives,” according to Ari Li (’18).

This year’s show featured psychologist Dr. Jim Wand, who hypnotized audience members into, among other things: seeing faces behind stage-lights, improvising choreography for the song Despacito, giving CPR to a puppy, fighting a zombie dog upon hearing the word “IMSA,” and screaming aloud upon hearing the word “Galena.”

In addition to the hypnosis volunteers, eight more audience members were called on stage to help ensure the safety of the hypnotized patients, keeping them from falling off their chairs.  Krishna Thakkar (’20) commented, “Up on stage, I was able to see just how ‘into’ it everybody was; it took my whole weight to keep the chairs from moving at some points.”

“The hypnotist show is awesome,” said Ari Li, “on par with cultural shows and Clash of the Halls events in terms of being a must-see.”

Be the first to comment on "Hypnotism at IMSA"