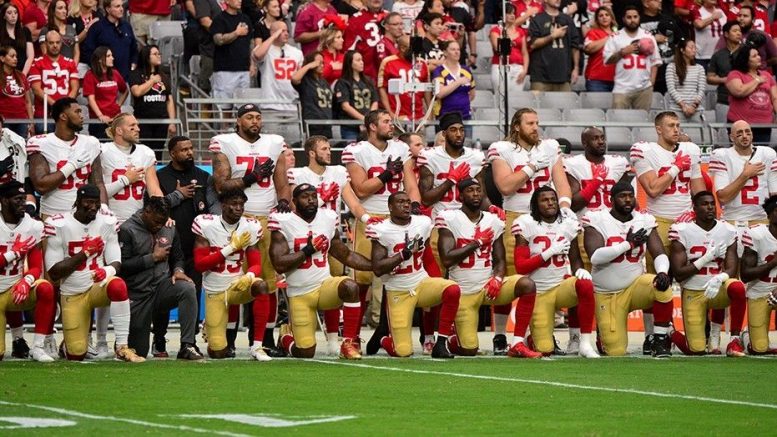 On September 22nd at a rally in Alabama, Donald Trump criticized NFL players who refused to stand for the National Anthem and pushed for NFL owners to discipline them accordingly.

Specifically, he commented “wouldn’t you love to see one of these NFL owners, when somebody disrespects our flag, to say, ‘Get that son of a b**ch off the field right now. He is fired. He’s fired!’” And on the following Saturday morning, Trump tweeted that “Going to the White House is considered a great honor for a championship team. Stephen Curry is hesitating, therefore invitation is withdrawn!”

He continued with two more tweets which challenged the NFL players: “If a player wants the privilege of making millions of dollars in the NFL, or other leagues, he or she should not be allowed to disrespect our Great American Flag (or Country) and should stand for the National Anthem. If not, YOU’RE FIRED. Find something else to do!”

While this act was only started last year when former San Francisco 49ers quarterback Colin Kaepernick decided to kneel to protest the police brutality and racial prejudice in America, it has grown, becoming a widespread phenomenon throughout multiple sports leagues.

NFL commissioner Roger Goodell criticized Trump’s comments saying, “The NFL and our players are at our best when we help create a sense of unity in our country and our culture. There is no better example than the amazing response from our clubs and players to the terrible natural disasters we’ve experienced over the last month. Divisive comments like these demonstrate an unfortunate lack of respect for the NFL, our great game and all of our players, and a failure to understand the overwhelming force for good our clubs and players represent in our communities.”

But, through Trump’s attempt to target and divide players, he has unintentionally caused many more teammates and organizations to rally together. More than twenty-five NFL teams had players who decided to kneel, lock arms, or raise their fists in solidarity during the national anthem the following Sunday.

These actions, however, have provoked boos from many NFL fans. Some teams like the Pittsburgh Steelers decided to abstain from the anthem altogether by staying in the locker room. Most NFL owners released official statements agreeing with their commissioner and supporting their player’s actions throughout the following week. Back in the NBA, the Golden State Warriors have also shown their unity by issuing a statement in response to the president disinviting Curry, commenting, “While we intended to meet as a team at the first opportunity we had this morning to collaboratively discuss a potential visit to the White House, we accept that President Trump has made it clear that we are not invited.” He further states, “In lieu of a visit to the White House, we have decided that we’ll constructively use our trip to the nation’s capital in February to celebrate equality, diversity and inclusion — the values that we embrace as an organization.”

Despite the controversy he has created, President Trump has continued tweeting at the NFL and its players. IMSA’s own Dr. Kotlarczyk remarks, “I’d like to see the President focused on more important issues than sports, issues where he has the power to guide the collective attention of the nation and unite the citizens to make a difference: the impending humanitarian crisis in Puerto Rico, for example.”

The aftermath of this incident has raised questions about the discourse of the nation and how divided the American people are on this issue. The racial and political implications of this incident cannot be dismissed. These factors determine the importance and weight of Trump’s comments and alter America’s values in the process.