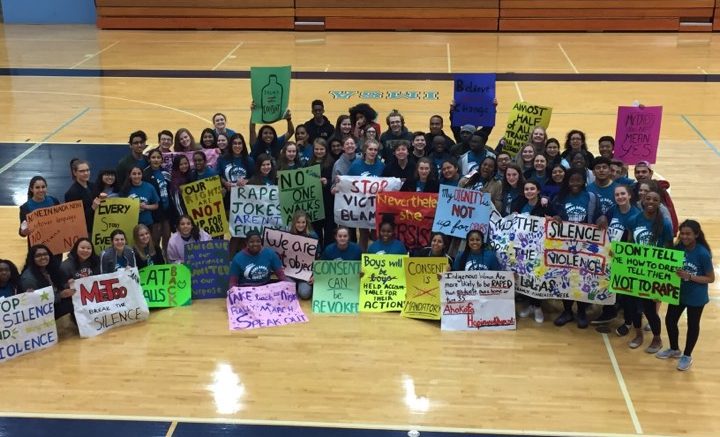 Attendees of Take Back the Night rally gather in the gym after the march. (Source: Bianca Leoni)

Last week, beginning on April 9th, Beautiful Empowering Ladies Leading All (BELLAs) held their annual Sexual Assault Awareness Week. Throughout the week, BELLAs hosted events each day during midday and in the evening. Although the effects of these events cannot be definitively measured, their turnouts provide a decent estimate.

To kick off the week on Monday, BELLAs hosted a midday event where people could take a pledge against sexual assault and stamp their hands on a banner to seal their words. The banner soon filled with handprints as more members of campus came over and, by the end of the event, the banner had very little white space. The week was off to a promising start!

At the Monday night self-defense workshop, Mounisha Kovour (‘18) and Kathryn Downey (‘18) showed members of the IMSA campus how to protect themselves in several different situations. Approximately 25 people came to the event, but perhaps half of those attendees were members of BELLAs. Everyone walked away with more knowledge of defense tactics and a pamphlet with strategies to avoid being attacked.

On Tuesday during midday, BELLAs held an event to explain the age of consent. Considering the event was intended to be a small GA, it had a sizable turnout. Taking place in the Old Cafe, Tyler Fullilove (‘19) hosted a short presentation to discuss the age of consent. Passerbys stopped by frequently, and BELLAs was able to reach more people, hopefully leaving them with knowledge about the topic.

That night, BELLAs hosted a documentary viewing of Seeing Allred in the AC Pit. Unfortunately, the documentary had perhaps the worst turnout of any event during the entire week. With almost no non-BELLAs members present, the documentary ran with little effect on campus. Although the lack of attendance may be attributed to LEAD the same night or sports during the afternoon, there’s no way to pinpoint the exact cause, if there is one.

The next day, Wednesday, BELLAs invited a speaker from Mutual Ground to give a talk about consent, and again, members of BELLAs outnumbered the other attendees.The lack of attendance at this event felt concerning. It was a missed opportunity given to the entirety of the community to learn what qualifies as sexual assault, an important and often taboo or even silenced issue on campus.

Although Sexual Assault Awareness Week is over, the discussion surrounding sexual assault and harassment shouldn’t end. However, I’m not confident that it ever even started. Without a majority of campus being willing to address the issues we face as people, as a campus, and as a society, we cannot change anything. Air your grievances. Tell IMSA what they can do better. Give BELLAs suggestions for the return of Sexual Assault Awareness Week in following years. Stop being silent.

Not attending events such as consent workshops and Take Back the Night  negatively impacts both yourself and over 600 other students. BELLAs has the privilege of working with IMSA’s president, principal, and counseling staff to host these events. This school knows that sexual assault and harassment are not foreign issues, but somehow, a community of around 750 people hasn’t shed light on this topic. Each year there’s an opportunity to reclaim the right to safety and if you aren’t part of the solution, you’re part of the problem.

When the IMSA community faces issues, we complain that we need conversation and events to counteract them. However, when we host these conversations and events, we are met with very little enthusiasm and attendance. Whether or not you take part in the discussion is up to you. The IMSA community cannot allow itself to become apathetic; we’ll never stop speaking. Join the conversation.