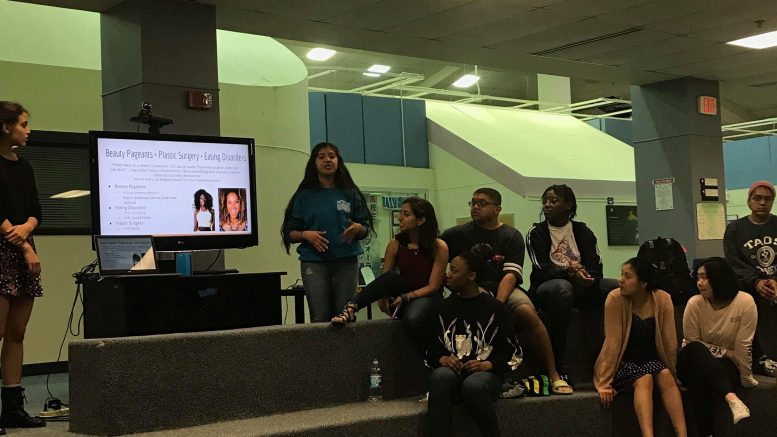 Last week, from Sunday night till Friday noon, BELLAs held their first Body Positivity Week. What had the potential to be an enlightening and enjoyable week for the IMSA community unfortunately fell flat as event attendance remained largely restricted to BELLAs members, demonstrating yet again IMSA’s apathy.

Sunday night, BELLAs went around to some of the bathrooms and put positive affirmations in the mirrors. Though the bathrooms didn’t generate as much buzz as was hoped, the ultimate effect of the post-it-notes (individual confidence) was hopefully achieved, even if it was only for a few seconds.

On Monday during midday, BELLAs introduced the week by handing out flyers, which were taken by curious students and at night, BELLAs, along with BSU, ISA, ASIA, Alma Latina, and MSA, hosted a Worldwide Body Image GA, with representatives from each of the clubs presenting a few slides on how body image is viewed in their culture. The event had a solid turnout of around 45 people and an interesting discussion afterwards, during which students talked about their own experiences with body image and how IMSA contributes to their own perception of body image. This event was the most promising yet, as the large number of people who attended allowed for a variety of perspectives that facilitated a thoughtful and educational discussion.

On Tuesday during midday, BELLAs hosted a Phake Photos event in the Old Cafe, using a video to demonstrate how Photoshop misleads consumers about what models in advertisements or magazine covers really look like. Midday events are always hard, as most students take advantage of the break to eat lunch or do homework, but the event had a fair turnout considering its constraints.

The night event, a “What Makes You Beautiful” photo shoot, had an extremely low turnout, likely due to poor advertising and a time change. Even so, this event had the potential to make a large impact on the IMSA community, so it was disappointing to see the sparse attendance.

On Wednesday, BELLAs and FAB cohosted a face mask activity that had a nice turnout of people from all genders and a talk by Kelly Page about self-confidence, leaving participants refreshed, inspired, and confident.

On Thursday during midday, a Buzzfeed video was played about people with disabilities discussing their own experiences with body image. After, Mr. Lundgren elaborated on the topic, utilizing his own experiences with his daughter June to give an informative talk that drew a mid-sized crowd. At night, an IN2 talk given by counselor Kevin Kusy about body image and self-confidence had a decent turnout and paved the way for a talk on Tuesday, May 8 about eating disorders.

Friday during midday was the closing event, where a slideshow of pictures from throughout the week played. The sole computer surrounded by BELLAs members and a few interested students was an accurate representation of the week altogether. Some students, such as Louise Lima (’19), gained a new perspective after the week and believed that “the events sparked meaningful discussions that you wouldn’t have on a day to day basis.”

However, the IMSA community as a whole did not make an effort to seek out knowledge and broaden their perspectives on body image. This isn’t a new problem, but it doesn’t seem to be talked about enough, and when it is, it isn’t treated with the level of seriousness that it deserves. IMSA is apathetic, and in a school filled with people eager to change the world, this is a toxic combination. In response to why attendance was so low, Miriam Franks (’19) said, “I thought that it was a good idea and I wish that I had participated, but none of the event times worked out because it was a crazy week.”

It’s true that IMSA students are busy, possibly abnormally so. However, we are always going to be busy, and if we don’t learn to take advantage of opportunities when they are offered, then we have no business calling ourselves leaders.