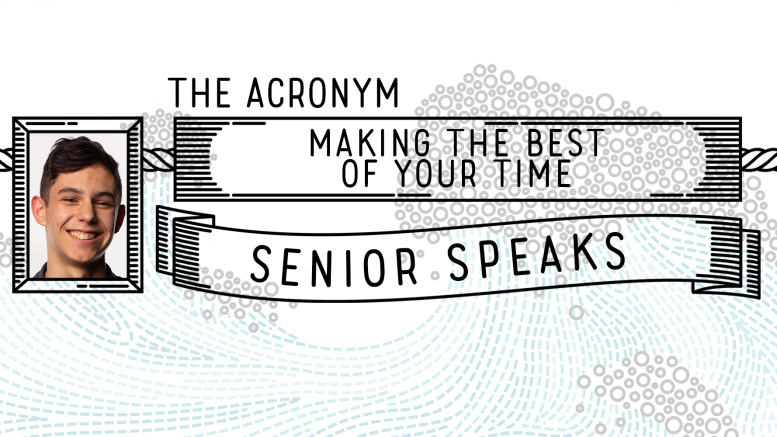 One of the sections included in the annual Senior Edition is a series of essays titled Seniors Speak. These works are written and submitted to The Acronym by members of the graduating class, allowing them to reflect on their experiences, share advice, and advocate for change. The writer of this piece is Larry Donahue (Carleton ’22), who lived in 1507 B Wing (despite efforts otherwise) and was involved in Graphic Design Club and hit Diamond in League of Legends, so he’s kind of a big deal.

One day after visiting their college options, one of my friends messaged me about how they regretted coming to IMSA and ‘wasted their potential’ here. While it’s no secret IMSA is more difficult than most other high schools, and sometimes the end goal of college doesn’t pan out in the best way, this doesn’t mean that potential is lost.

However, this doesn’t mean that you aren’t able to make the best of what IMSA throws at you. If you put the effort in, you’re able to find the good within the bad and take advantage of it. In fact, some of the most defining parts of my time at IMSA came out of terrible situations.

Bagel Party came from stressing out over my finals during my first semester at IMSA. I felt like banging my head against a wall, but from the stress I was able to create something that caused the opposite feeling—relief. From this, Pranav, Cameron and I were able to make Bagel Party an event to help people relax for everybody on campus. Bagel Party went from a small get-together to a campus-wide lesson to make the best of what’s thrown at you.

Getting ripped away from the hall the other members of my “quad” called home for two years (and that I dreamed of living in my entire junior year) almost made me drop out of IMSA. However, being consolidated into 1507 with some of my closest friends helped us be able to enjoy where we lived, foster a community that fit us within our wing, and I was able to make the best out of Clash. My roommate, Adhav, once said that 07 came in as the seventh seed, and we missed winning by the smallest possible margin—which is completely true. This was partly due to the spirit of Clash putting my “quad” in their element. Without making the best of our housing situation, they wouldn’t have had the spirit to make such a heartwarming Clash movie, or a comedic talent show, or spent the time to come up with original ideas for a meme theme like 24/7. I tell people now that I’m glad I got moved to 07, and even though I wish I was with my friends in 04 more than anything, I’m able to call myself a proud member of 1507 B Wing. That’s something that I thought I would never be able to do.

Watching my upperclassmen that I revered leave IMSA during my sophomore and junior years left me confused and afraid as to what I would do without them. Coming back to IMSA after the summer break as a junior and a senior, however, felt even weirder. A campus without my upperclassmen felt empty, and the new classes coming in didn’t even come close to filling the place in my heart the previous graduating class had. However, despite my upperclassmen being gone, I’ve been able to try and be as good of an influence as they were to me to my underclassmen. I’ve been able to sit on both sides of the table—listening to my upperclassmen’s stories, and being able to tell their tales to my underclassmen, mixed with their own. I’m a sucker for tradition, and sharing tradition with my underclassmen has been one of my favorite parts of IMSA. One of my upperclassmen, Zach Ungerlieder, wrote a poem about this called “Gods” (https://tinyurl.com/1507gods), which describes this experience perfectly.

Making the best of your time at IMSA doesn’t just involve making the best of the biggest things in your life; it’s making the best of the little things as well. Turn a boring night into a night where you cook food or vibe with your friends (or both!). Make being swamped with work an organized, late night grind with serene music and an opportunity to watch the sun rise at the end of it. You’re required to take a certain amount of courses at IMSA, make sure that they are courses you think you’ll genuinely enjoy taking instead of classes you think you “have to take” for college.

All in all, try to make the best of what you have, no matter what happens. I got dealt a mediocre hand during my time at IMSA, but I was able to play it right. From my hardships, I was able to create friends I know I’ll keep for as long as I can, memories that I know I’ll never forget, and stories I know will be passed on. Three years goes by quicker than you’d think, and looking back, you won’t want to regret them. At least, I know that I won’t.

Seniors Speak: Alhumdullilah for Everything

Seniors Speak: Note to Self

Be the first to comment on "Seniors Speak: Making the Best of Your Time"