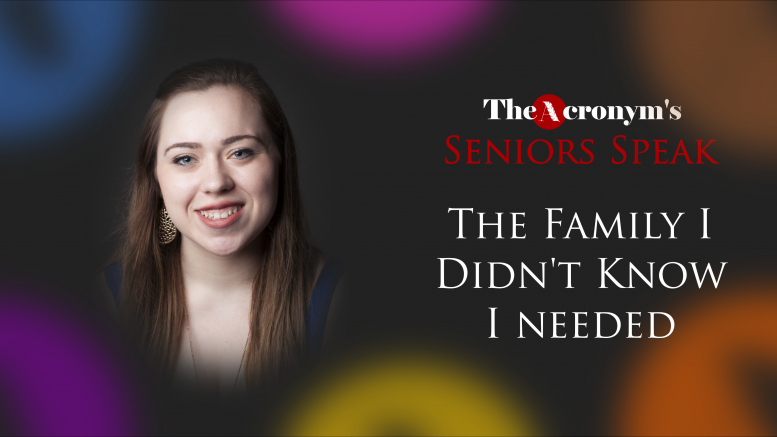 Kathy Swebenski (‘16) submitted this article as part of our annual Seniors Speak series. This series is designed to give seniors who are leaving a final opportunity to share their voice and preserve the traditions and experience of IMSA’s seniors alive long after they’ve graduated. Kathy lived, worked, and played in 1501. She worked as their Community Developer (CD).

IMSA really is like one big dysfunctional family for me. There’s times it makes me frustrated, stressed, or angry but in the end I always still love it. And while people from other halls may be like the aunts and uncles I talk to often enough, the people who live in 01 are like my immediate family. I spend day in and day out with them and having to move away from my family next year is a really scary thought.

I came in sophomore year a very different student. Anyone you talk to will say I’m a really outgoing bubbly type of person, but during freshmen year I was the awkward girl at the back of the classroom who fumbled over her words just talking to a cute guy. I was nervous to come to IMSA, but I was also really excited because I knew it could give me the opportunity to be more true to who I felt I was. I had gone to school with many of the same kids my entire life and had felt that I was forced into a mold that I couldn’t break out of by that point. But the thought of coming to IMSA, where no one knew me, allowed me to be whoever I wanted.

I arrived on campus for Excel and was a little intimidated at first because it seemed like everyone there – when I know in reality it was only about half of the students – already knew each other from SEAMS. I was kind of quiet at the start, just trying to get to know the other students. And then one night sitting in my room with my roommate who I hadn’t hung out with overly much yet, the song American Pie came on her Pandora. We both started by just humming along a little, but by the end of the song we were both singing along holding out that last long “This will be that day that I diiiie”. We ended up listening to the song multiple times throughout Excel and on the last possible day decided to be roommates for the school year as well. We stayed roommates for the next three years and I can honestly say I would not be the same person today if I had roomed with anyone besides Jeanette.

After excel, when the school year actually started, is what really impacted me during my time at IMSA. Sophomore year was the time I was able to go from the quiet girl in the back of the classroom to winning the hall superlative“Life of the Party” and this is mostly thanks to the amazing seniors that I looked up to and who took me under their wings. On move in day, we were almost immediately swept up after our parents left and forced into typical ice breakers. I remember the one that stood out to me most, which I swear may have been an invention of my CD, Bree, was Huggy Bear. It forced me to completely break my personal space comfort zone (which if you know me now may be surprising how serious I used to be about my personal space bubble) and get into a group hug with a bunch of kids I had known for only a few hours of whatever number Bree yelled out. I was the type of person who hated touchiness, but by the end of the game I was hip checking people to get into one of the group hugs. I remember by the end of the day getting back to my room and thinking how cool all the upperclassmen seemed to me.

I can’t recall the moment my seniors went from just being the seniors in my wing to MY seniors, the same way I remember when Jeanette and I went from two girls sharing a room to roommates, but I left IMSA my sophomore year red faced and puffy eyed because those seniors had become some of the closest friends I had ever had. They inspired me to come out of my shell, embrace being a little weird sometimes, and taught me how to really have fun. It was the late nights in down quad, the prank wars, the 01 dance parties, the 4am Steak and Shake shoot, and even just sitting around talking to my seniors that helped me become “the life of the party”.

01 became the second family I had never known I needed. Even after my seniors left I found I still had an amazing family with my other hallmates. Because we all know once winter comes is when you really get close with your hall because even walking out in the cold to get Sodexo is too much, let alone wandering over to a different hall to just hang out. But the time of the year that I feel we always truly come together as a hall is Clash. And this year’s Clash was the closest I have not only felt to my hall, but to IMSA as a whole.

In 01 we all worked so hard to prep for all of the events and I remember after we got second in Talent Show I couldn’t stop smiling the rest of the night. We walked back from the event as a hall and were screaming our chants, even though it was only the second day and we hadn’t even gotten first. We were just ecstatic about how our hard work had paid off. And what made this year so special was how all the halls embraced the mentality of coming together as a hall over worrying about winning. At the pep rally, we all cheered for one another and it was less of a cutthroat competition as a family reunion with a little friendly competition between the individual families. I’m not sure all other halls are this way, but I really do consider the other members of my hall family. I had never been someone to get homesick, but I know next year I’m going to be seriously missing this family.

So what I really wanted to say is be there for the rest of your hall, especially your underclassmen. I know I took my job as CD very seriously because I care about 01 so much and I wanted to make everyone who lived there this year love it as much as I do, which I know might be a bit impossible, but I at least wanted everyone to feel the strong sense of community I did. So I want to stress to you all to be there for each other. Seniors it may be almost the end of your senior year, but there’s still time to make an impact. Reach out to the other people in your hall, show them why they should love this place and what it’s like to be a family. But juniors, I’m really looking to you to the role model, friend, and sibling your incoming sophomores will need. Even if you don’t mean for them to, your sophomores will look up to you and if you try you can really inspire and transform them. I cannot thank my seniors and everyone else who has had an impact on me at this school enough for what they have done. I have done a lot of maturing over the past three years and I think I’m ready to enter the real world as an adult now. I know there’s times next year I’ll be nervous or homesick, but I’m not that scared because my family has prepared me well.

Seniors Speak: All the Little Things

Be the first to comment on "Seniors Speak: The Family I Didn’t Know I Needed"