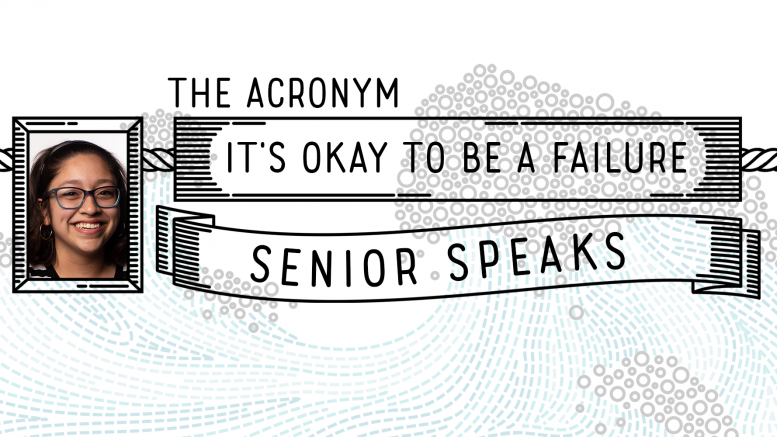 One of the sections included in the annual Senior Edition is a series of essays titled Seniors Speak. These works are written and submitted to The Acronym by members of the graduating class, allowing them to reflect on their experiences, share advice, and advocate for change. The writer of this piece is Nyxel Camarena (’18), who lived in 1501A and was President of Alma Latina and Co-Liaison of PME.

When writing this, I didnt know how to start. I knew how I wanted it to end and what the middle should kinda look like. But besides that I didn’t know what to say, so I guess that’s my first example of one of my many failures.

When I first came to IMSA, I had never failed before. And I thought that once here, I would continue to succeed. I mean, I made it, right? Once you’re in the great, mythical, and magical academy, nothing can stop you — not even yourself. I soon realized that I had played myself into believing that. First semester sophomore year, I was in SI Bio (before the weird change). I was so upset that I was unable to test out of the course after having already taken it freshman year at my homeschool, that I paid little attention in class the first couple of days. However, after taking the first test of the semester, I realized that it was a mistake. I had failed my first exam in my entire student career. I shut down. I didn’t know how to respond. How was I supposed to? It wasn’t like I could retake it. The 50% was permanently stuck next to my name. I thought, “Maybe if I pay attention, I will be able to do well again,” but the next test came and I failed again. And the next came, and once again I failed. I went all of SI Bio not having passed a single test. For the first time, I had failed to learn.

I didn’t feel like a complete failure until the end of first semester junior year. For some, MI3 was their favorite class. For me it was hell on earth. I spent every free moment working to try to strengthen my skills. But despite all my work, I ended up failing MI 3 with a 69.3%. I was devastated. I felt as if I had failed my family, especially my parents, the two people who had given up everything for my siblings and me. What was I going to say to my parents? Hello yes, your eldest daughter has failed a class even after she promised she never would. What was I going to say to my siblings, the people who look up to me the most? Your big sister, your role model, is a failure. It took me some time to realize that among all the self-hate, that this was a blessing in disguise. To me this was a liberating experience, one in which I learned so much more about myself.

Let’s talk about how the college process also affects the way people view themselves as failures. By the time April 1st rolled around, I had already experienced failure (a multitude of times), so how could a rejection be different? I came to the quick realization that not many of my peers had experienced failure to the degree I had, or even at all. All of a sudden I heard an echo of “I’m a failure for not getting into x school” or “ I never imagined of going to a state school.” People would try to console each other by saying, “You are not a failure for not getting into that Ivy” or “Going to a state school might not be the best but hey at least you got in.” When I hear this, I never really understand these sentiments. Why it was such a big deal to not go to an Ivy or getting into a state school? For me, it was a success to even get waitlisted from a school with a 70% acceptance rate. But what was the most confusing thing to me was why people wouldn’t let others feel like a failure. Now hear me out. After failing so many times, I’ve learned to accept feeling like a failure. I think it is natural and normal to have those sentiments, so why wouldn’t you allow yourself to go through your emotions? By allowing yourself to hurt, you learn to grow. You learn how to tackle a problem better, you learn how to accept your failures and turn them into success. It might be difficult to accomplish the first, second, or third time but it will eventually ease with time. You can not expect perfection 100% of the time from yourself or others. That creates a toxic environment where growth is nearly impossible. By acknowledging your failures you are allowing yourself to become better than those who expect nothing other than perfection.

To this day I think back on my time at IMSA and wonder whether if I had just quit all my clubs and focused on my academics a bit more, I would be in a better position. But what’s to say that my current position isn’t the best position? I will be attending a state school in the fall, only to graduate with no debt in four years. Could I say the same if I had gotten into Stanford, Vanderbilt, or Harvard? Would I feel secure that my family would be okay without me if we were 200, 500, 1000 miles apart? I don’t think many people would really know how to answer that, including myself. A number, unfortunately, seems to constantly dictate our lives: your grade on a test, your GPA, the acceptance rate of a university. It also seems to change the way people view you and how you view others. It tears down friendships, and it tears down us. Our failures always seem to be measured by a number that has been arbitrarily assigned to us. At IMSA, we spend the majority of our time being told to think critically about every problem presented to us, but we sometimes forget to think critically about ourselves and how we let our failures become our biggest characteristics. We allow them to take us over and consume our daily lives. We forget to tell ourselves that it’s okay to fail and to feel like a failure.

Seniors Speak: A How To: Documenting Time Well Spent

Be the first to comment on "Seniors Speak: It’s Okay to Be a Failure"