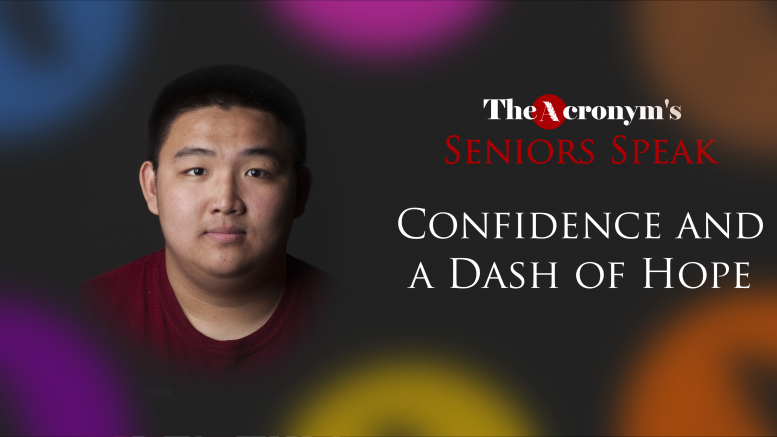 Jason Yang (‘16) submitted this article as part of our annual Seniors Speak series. This series is designed to give seniors who are leaving a final opportunity to share their voice and preserve the traditions and experience of IMSA’s seniors alive long after they’ve graduated. Jason lived in 1507 and served as IMSA’s Junior Statesmen of America (JSA) Chapter President during his senior year.

“So, would anybody be willing to speak main con on the issue?”

At this point, the Math Study Area was dead silent; not a single member out of that 20-person audience raised their hand.

“Come on guys,” said the Chapter President at the time, Aaron Geldner.

At my first Junior Statesmen of America meeting during sophomore year, I very unfortunately made eye contact with Aaron at this point. Immediately he declares:

“Excellent! Jason Yang will now be speaking for us!”

I froze. And as people started patting me on the back and clapping lightly while cheering me on and saying my name, only one thought crossed my mind.

When I got up to the front of the room, it showed. From what I remember, my speech was predictably terrible. I’m fairly sure it went something like this:

My nervous self eloquently struggled to articulate my words and desperately stumbled through my points. Throughout, I squirmed, stressing about how bad my speech was before giving up after only three of the six allotted minutes had passed. Retrospectively, it’s easy to see that the speech was a result of my lack of confidence.

It is fairly clear what I am leading towards; one’s mindset or approach to a situation is influential and defining factor of the outcome. Not only does this apply to public speaking, but also plays a large role in standardized testing and social situations. The day of AP Chemistry, I heard somebody say, “It’s ok just apologize to your parents for wasting $90 and move on.” In many cases, confidence and the right mindset go a very long way.

However of course, I’m saying things that are fairly obvious. The phrase, “Confidence is Key,” is fairly commonplace. And while it is easy to pinpoint and discuss situational mindsets such as the previous examples, the point of this Senior Speak is more so to talk about some of the community mindsets and comment on just a few that I have noticed or adopted personally.

While it is easy to focus on some of the more negative mindsets at IMSA, the positive ones are not only ubiquitous but also, to a smaller extent, give me hope in humanity. For example, one mindset that sticks out is that IMSA in general has an accepting environment, at least comparatively; it doesn’t matter who you are, what you believe in, whether you’re male or female or neither, LBGTQ+, Asian, African American, Hispanic, etc. there is a high probability that you will find some friend group who will support and accept you. Students here, especially upperclassmen, tend to be incredibly helpful and cooperative with their younger peers. This is astounding.

The most obvious component of this blanket stems from the toxicity surrounding college admissions. Note, in no way am I exonerating myself from this toxicity. It stems from an overlaying acknowledgement that towards the end of the IMSA career, there is a long, arduous college admissions process.

At IMSA especially, the process is undeniably competitive. I’ve seen this firsthand. People pit their ACT scores and their GPAs against another student’s extracurricular activities and college essays. Infinitely many comparisons are drawn between pairs of students while those who lose the comparison are somehow attributed a lower personal or social worth.

I would like to point out to those who feel or might feel unhappy or disappointed with the college they have selected should realize that in six months when we start a new phase of our lives, none of the toxicity or constant stress matter; wherever you go to college, you will almost certainly enjoy yourself. There’s no sense in giving in to the toxicity and competitive nature of IMSA. Don’t feel bad because you have a lower GPA than your roommate. Don’t beat yourself up because you didn’t get into an Ivy League school.

Step back and de-stress. You’re going to be fine.

Of course, that is not an invitation to not put forth the effort towards excelling in terms of classes. However, at IMSA there is an incredibly toxic mindset regarding the correlation between how hard somebody tries and how good or smart they are. People who are considered the “Gods” in school are those who put forth little effort but are still able to comprehend the subject matter, and those who work hard are at times dismissed.

For example, I can think of a number of situations in which people were talking about a girl who was incredibly good at math but ignored because she supposedly “studies math for 8 hours a day.”

While I have certainly been a guilty proponent of this idea, I have come to recognize that working hard should not be grounds for dismissal but instead be grounds for praise. It is always a good thing to put in the effort and get positive results. And whoever says otherwise should be ignored. This mindset is one that I hope diminishes significantly in the near future.

The two aforementioned mindsets are only a sample of the toxicity at IMSA; however, negative mindsets imply opportunity for growth and improvement. People and communities can change. It’s only a matter of awareness and effort.

In this same sort of way, there is always room for self-improvement, something I’ve tried to personally adopt. Very few people come close to the image of a perfect person/personality, but this does not mean you shouldn’t change for the better. You alone know your biggest flaws and weaknesses. And once you’ve identified one, don’t just settle. All the time, I hear people saying things like, “I’m an asshole but I’m ok with that.” Don’t. Settle. If all it takes is a change in mindset or a change in some of your habits and a little bit of effort, then why not take the amount of time to be a better person? Imagine IMSA if everybody adopted this similar mindset of self-improvement. Imagine if the whole world adopted it.

As I write this at 2:48 AM, I’d like to point to President Barack Obama’s words and leave with one final mindset for the future: The Audacity of Hope.

This is the end. After two years of saying goodbyes to the upperclassmen, it is truly strange to think that I will be the one not returning next year.

It’s hard to believe that my habits of checking IMSA Virtual Campus and pointedly ignoring the endless [Student-l] emails will be gone. It’s hard to believe that my 5 closest friends currently asleep next to me will not be there next year to laugh and play and suffer with me. It’s even harder to believe during the torment of my junior year, I would have given anything to be gone, but now I would do anything to stay.

And now, all that I can do is hope; I can only hope that the faces that fill my surroundings and the new friends I make and the experiences I have will be even half as good as the ones at IMSA. And even though we will all proclaim to stay in touch with each other over the next few years, I can only hope that that will remain true and that our breaks will align such that we can see each other another time.

I am excited to not only tell my funny and crazy stories to my friends but also hear theirs. I hope to see all 205 of you at the 30-year reunion.

Seniors Speak: How to Add Excitement to a Monotonous Schedule (NOT a step-by-step tutorial)

Seniors Speak: Hubris is Deconstructed by the Learner

Be the first to comment on "Seniors Speak: Confidence and A Dash of Hope"