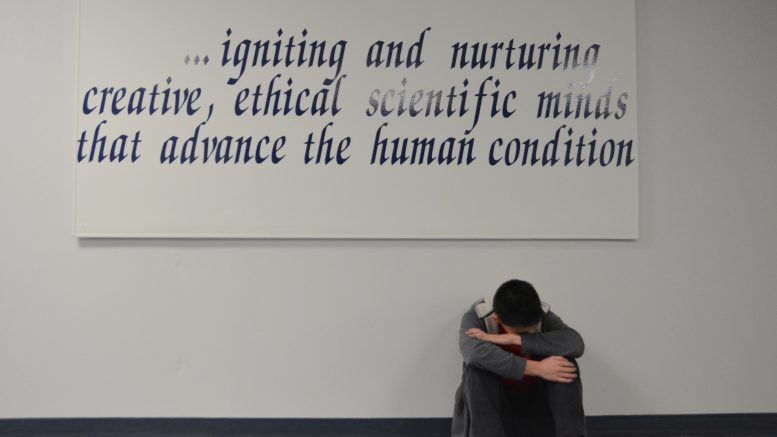 Blake hides from his emotions - if they can't see his face, will they even know it's him? (Source: Shubhi Verma)

It has been brought to the attention of the Acronym staff that one of IMSA’s students, Blake Truman, has been witnessed leading around three teenaged blobs. I took up the project and, after further investigation, discovered that Blake’s blobs are physical manifestations of his negative emotions, created from a mutation in his own DNA. An SIR called The Blake & Friends Genome Project is already underway to isolate the exact base pairs that may have caused this anomaly, and Dr. Dong’s SIR has shifted its focus to investigate how and why the Law of Conservation of Energy was broken to bring these beings into existence. In the meantime, The Acronym has been on the case. I followed Blake around for a month to get the inside scoop on exactly who and what these blobs might be.

I asked Blake when his condition first arose, and he responded that, during an SI Bio lab gone horribly wrong, a spontaneous mutation in his genetic code created three living entities out of thin air: Sadness, Worry, and Stress. Blake elaborated, “they basically follow me around all day, whispering in my ear. I’ve contacted the police and tried to file several restraining orders, but they were all denied on the grounds that you can’t place a restraining order on your own DNA.”

I first spoke to Sadness, the head honcho of the emotions and a 17-year-old grey blob. I asked him what he does for fun, and he replied that he reads eulogies, writes epitaphs, and watches videos of puppies dying.

Worry regularly writes blogs reminding Blake of everything he’s ever done wrong. “Yeah, I manage this blog for him. I just know that one day he’s going to want to see these memories. He’ll thank me for writing them down in excruciating detail for the entire world to see.”

Stress is a bit more productive with his time, being the president of the Re-Stress Club. “The De-Stress and Re-Stress Clubs have been locked in a brutal war since their conceptions in 1783,” he told me.

Stress also requested that I remind readers that the Re-Stress Club is having its first GA in the TV Pit on September 18th at 8 PM. Club obligations include taking finals every week, doing three problem sets per week, and never, ever blowing bubbles.

At the beginning of my month with Blake, he seemed unable to deal with these creatures. About a week in, I found Blake curled up in a blanket fort in his room while the three blobs swayed around him. “What are you doing?” I asked, cautiously pushing aside an edge of the blanket. Blake’s arm swung around and smacked me in the face.

“Sorry!” he hissed. “But don’t open the blanket fort! They’ll get in!”

I glanced at Blake’s roommate, laid out on his bed. The roommate shrugged like this was perfectly normal.

“Okay,” I said slowly, standing outside the fort. Stress screamed and I spoke over him. “What are you doing?”

“Researching de-stress techniques!” Blake called back. “I’ve always been able to ignore them before, but now that they actually exist….”

One technique he learned was kickboxing, and he began kicking the blobs in the face whenever they got particularly annoying, chanting “Jab, jab, hook, uppercut!” Sometimes, when Blake was feeling particularly good, it was almost like the emotions couldn’t reach him, held back by some invisible force.

Just as our time together was coming to an end, StudCo’s famous Mental Health Initiative week arrived. On the very first day, Blake went to CAB’s bubble day, and as he blew bubbles, Worry screamed, “Blake, why are you wasting your time blowing bubbles? You have so many assignments to be working on, blowing bubbles is going to be the reason you don’t go to college!” However, as Blake de-stressed and practiced self-care, a force field arose around him. “Blake… I don’t feel so good,” whimpered Worry.

Dr. Dong has issued a statement saying that he will be offering another SIR next year to investigate the apparent existence of a new type of field, the anti-stress force field. The interest form can be found at: https://tinyurl.com/BlakeandFriendsSIR

Krishna Thakkar is a junior wing guide in 03C and is heavily involved in Debate and Club Terra. This is her first year as a staff writer on the Acronym.

The Back to School Edition 2019

The Back to School Edition