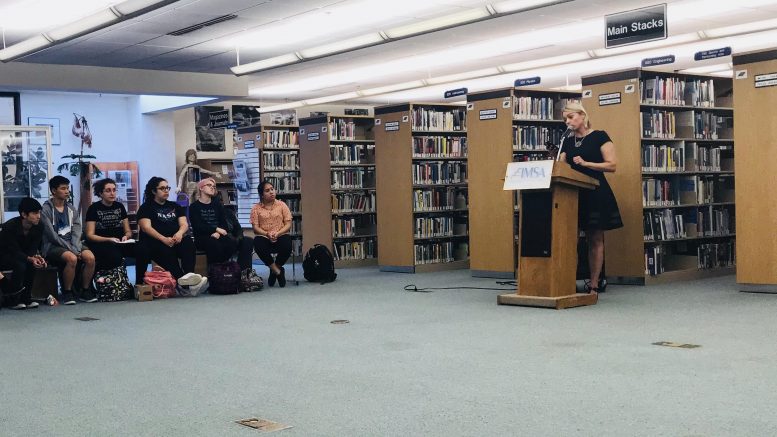 Kelly Page reads an essay to the audience about being a women in a predominantly male field.

This past Tuesday, October 9th, Spectrum and Peer Multicultural Educators held a Gender Read-In in the IRC. This event is the first of its kind for the 2018-2019 school year. Last year, PME held similar events, including a read-in centered around race and ethnicity and a panel about women in STEM.

Preceding the event, Maxine Alexandre-Strong (’20) and Lily Li (’20) of Girls IN2 STEM spoke about Ada Lovelace Day, which happened to fall on the same day as the Read-In. Ada Lovelace is widely considered to be the first computer programmer, and she consequently motivated other women to be involved in STEM once her work was brought to light.

All pieces which can be found online have been linked. The pieces read are as follows:

Isaiah Crews (’19) followed her with an excerpt of The ABCs of LGBT+ by Ashley Mandell. The first 40 attendees at this event were gifted this powerful book by PME.

Becca Ellington (’19)  followed with “Undefined” by an unknown author.

Dr. Adrienne Coleman, the coordinator of IMSA’s diversity and inclusion education and PME, read another excerpt from The ABCs of LGBT+ by Ashley Mandell.

Anthony Stuckey read an original poem by his junior year roommate at IMSA.

Aryan Walia (’19) read an excerpt from Born This Way: Real Stories of Growing Up Gay by Paul Vitagliano.

Tyler Fullilove (’19) read “The Cree Word for a Body Like Mine is Weesageechak” by Billy-Ray Belcourt.

Travis Ingram (’20) read an excerpt from a blog post called “The Null HypotheCis.”

Red Maier (’19) read an excerpt from a transcript of Lee Mokobe’s TED Talk.

Kelly Page read again, but this time she read an essay called “I’m Staying Safe,” an original essay about women in the STEM fields.

Finally, Jolin Zheng (‘19) rounded out the read-in with another excerpt from The ABCs of LGBT+ by Ashley Mandell.

Events like these are part of IMSA’s Diversity, Equity, and Inclusion curriculum. Throughout the year, more events will take place. Some will be mandatory for entire classes of students while others will be optional for those who want to learn something they wouldn’t typically learn in class. Events such as this read-in feature pieces, both original and public forum, that when read hold incredible power.

Each piece featured in the Read-In pertains to gender or sexuality and, whether you’re interested in learning more or just encountering some beautiful writing, these pieces will leave you satisfied.

A Reflection on the MLK Day Assembly