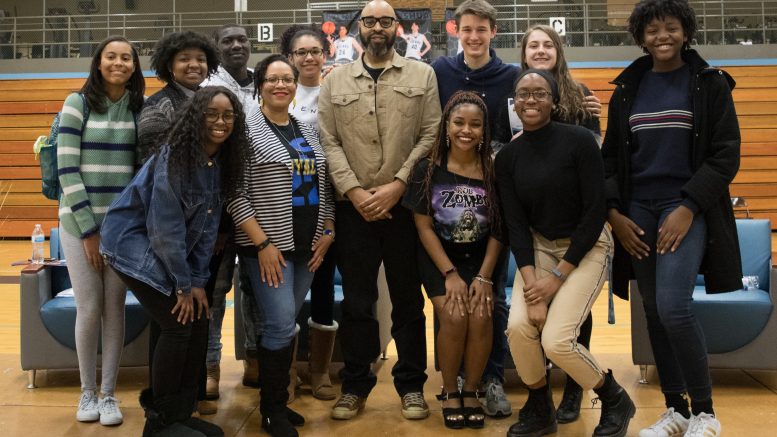 Annually, PME, IMSA’s Peer Multicultural Educators, in accordance with Dr. Torres, organize the mandatory assembly with the intent of educating the direct IMSA community of Dr. King’s mission for equality and justice. Subsequently, students, faculty, and staff congregated in the gymnasium to hear testimonials from notable alumni, students, and a performance of the Black National Anthem by Mod 21.

The event kicked off with an introduction by our very own Dr. Torres. He provided a warm welcome to the attendees and presented the Legislative Hero Award to Illinois Senator, Linda Holmes, and Stephanie Kifowit, an Illinois Representative. The award, which serves as an appreciative gesture, features a logic puzzle designed by IMSA alum, Dane Christianson (class of ‘11) known as the X-Cube.

Dr. Torres then redirected the attention back to MLK and Mod 21.

Mod 21’s rendition of the Black National Anthem, “Lift Every Voice and Sing” was followed by an introduction of guest speaker and notable alumni Cindy Lyles (class of ‘02) by 1502 RC, Candice Abioye. The gymnasium, initially filled with half attentive students, was soon engulfed with vibrant energy induced by the interactive spoken word poetry delivered by Lyles. Her poem, written in honor of Dr. King, required for the word “voice” to be echoed back to her from the audience. She spoke of topics regarding the misconceptions surrounding black female stereotypes, echoed positive affirmations, the importance of self-perseverance of the body and mind, and shared reflective thoughts about her time as an IMSA student. Throughout her performance, she received positive feedback from students and staff which surmounted in her receiving a standing ovation from the crowd.

Following Lyles’  performance were spoken word presentations by Jayda Yancey (‘19), Ann Lamptey (‘20), and Samantha Taylor (‘21), students who participated in the annual MLK speech competition. Each speaker recited a self-written piece reflective of personal experiences of racial prejudice, including exclusive insight on the overarching idea of the ‘black experience in America’.  The profound personal accounts delivered by these students also received standing ovations.

His speech consisted primarily of personal accounts of his time as a student of the IMSA charter class of 1989. As a child, he recalled being heavily interested in science fiction comics, which aided in his appreciation of STEM. He also mentioned his initial reaction to being a black student at IMSA, with the black demographic making up less than 5% of the schools’ population. He went in depth about the absence of Black American literature, music, and art he noticed within the IMSA community, at the time. Additionally, he spoke of the action steps he took to lessen the disparities. He advocated for there to be more literature written by black writers featured in the IRC, for the creation of a Black Student Union, and for an overall heightened sense of black awareness across campus.

Steele also spoke of instances when he experienced racial prejudice at IMSA.

As a student, he was accused of self-segregating and starting a gang with his friends by IMSA faculty.

The idea of him being a ‘gang leader’ came into fruition after he and a few friends decided to get matching haircuts. As many know, the 80’s were filled with many fashion fads, haircuts being one of them. Steele and friends got matching high-top fades (picture Will Smith from the Fresh Prince of Bel-Air) and were immediately questioned by administrators. But Steele was just being a fashionable teen who was wrongly accused.

The 2019  MLK Day celebration continues to echo in the minds of many due to the resonating speeches delivered by the MLK speech participants, Lyles, and Steele. Their messages transcend beyond the black community and adhere to any individual who wishes for their voice to be heard.

You can find additional pictures from the day of the event here.

A Reflection on the MLK Day Assembly