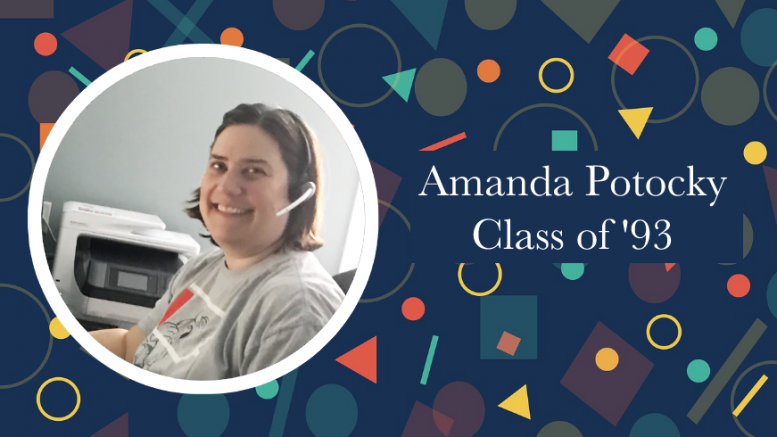 “Pursue your passions.” This is the mantra repeated by college admission counselors, parents, and high school upperclassmen alike when advising others on how to spend a high school career. Yet, even as these formative years provide numerous opportunities for teenagers to discover their future professions, this simple directive holds much greater complexity. How does one identify their passion? Is it necessary, or even beneficial, to commit oneself to a lifelong career? The Acronym aims to provide insight into these questions by examining the academic and career pathways of IMSA alumni and industry experts. Through interviews with leading computer scientists to healthcare innovators alike, we aim to examine how pursuing one’s passions is a dynamic and continuous process that will extend to one’s collegiate years and beyond.

As a project manager at IQVIA Biotech, Amanda Potocky evaluates cutting-edge drugs for the treatment of cancer.  Yet, her position in the pharmaceutical industry did not arrive from long-term pursuit. If you would have told her younger self about her current profession, she would have struggled to believe you.

Potocky originally hails from Carbondale, a small college town in Southern Illinois. “I wasn’t the smartest person in the class, but relatively smart,” she recalls. “But I was a very small fish at IMSA.” While the rigor of her new high school initially shocked her, she gradually found a place for herself in the tight-knit community. Academically, she immersed herself in classes that allowed her to work with numbers, and she remembers her extracurriculars fondly. She was involved in band and the Scholastic Bowl team, which went to state. Ms. McCarthy, IMSA’s current band director, became a close mentor and friend as a residential counselor.

Despite her positive residential experience, she found herself caught up in the competitive, college-oriented mentality among other students, many of whom equated educational prestige with success. Academically-focused students boasted about orienting their career trajectory around distinguished four-year institutions and graduate schools, frequently for what Potocky perceived as superficial reasons. “I call it ‘intellectual snobbery’,” says Potocky, who felt the pressure of adapting her peers’ expectations throughout her three years at IMSA. The aftermath of the experience would linger throughout her college years.

At Wake Forest University, Potocky double majored in mathematics and physics. However, after graduation, she quickly realized that neither field was her calling. “I had absolutely no desire to do theoretical research,” she says, quickly changing to biomedical engineering for her graduate school studies. After earning her Master’s degree, she fell into another pothole in the job market. For a year, she worked at Barnes and Nobles, organizing books and assisting customers at the register – a far cry from her career goals throughout high school and college.

It was then that her brother, an employee at a drug company, came with exciting news about a nearby job opportunity. Quintiles, now known as IQVIA, was seeking a data specialist for their clinical projects. Attracted by the possibility of working with numbers and analyzing datasets, Potocky applied and became immersed in data management for the next six years. She then transitioned into project management, where she remains today,  working on clinical trials and acting as a direct connection between researchers and pharmaceutical companies.

Through her years of job experience, she learned that the IMSA’s student’s “intellectual snobbery” didn’t always translate into high workplace performance. She met many people with different skill sets and levels of education, who flourished in their respective industries. “The best weren’t necessary at the top of their school,” Potocky says. “But they were able to take criticism and learn in the workplace.” She realized she needed to develop her public speaking skills in order to effectively navigate her environment. Now, her career is rooted in one of her greatest former weaknesses and enables her to continually strive for improvement.

To high school students just beginning to enter into higher education, she advises them to not lock themselves in too early. “Don’t get so focused on one path that you don’t think of others,” she says. “I knew a whole lot of people thinking they’ll be premed, and I’m not sure if any of them are physicians now.” When reflecting about her own experience and the many pivots within her own career, she notes that her open mindset allowed for her satisfaction in her current job. “The more you go on, the more you find out about things you didn’t know existed. For me, I had to stop and look around. I would rather change and find something new than get bored.”

1 Comment on "Career Pathways: It’s Okay to Be Unsure"