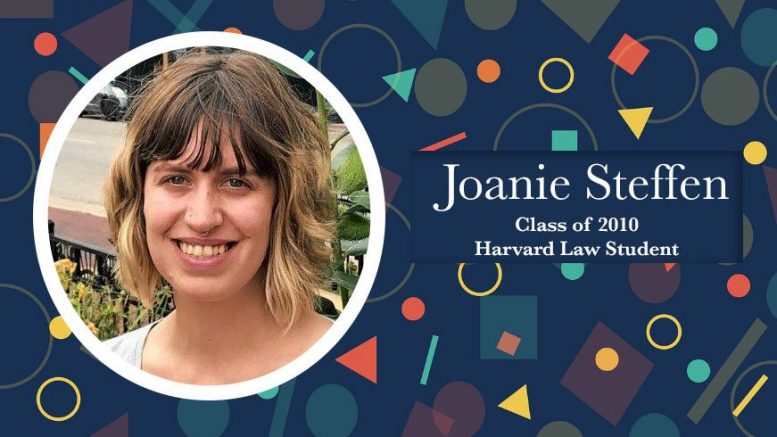 As IMSA students, we may not have “lawyer” towards the top of our list of dream jobs. For most of us, a STEM-oriented career path has always been the plan, and back in high school, IMSA alum Joanie Steffen (’10) thought she would go down this route as well. In fact, becoming a lawyer was the last thing she wanted to do. But while working on a legal case during her college years, Steffen realized that law is frequently integrated with STEM subjects, intersecting with the abstract logic puzzles we’ve grown so familiar with at IMSA.

Steffen’s first contact with the law began in a “weird job” with Dr. David Egilman, a medical doctor and professor at Brown University who was analyzing corporate corruption and public health. He had been researching cases in which many asbestos workers were becoming ill, only to realize that many corporations producing dangerous goods were aware of their dangers, but chose to hide this information from the public. This was a pattern seen repeatedly with asbestos manufacturers, who knew early on that their products could cause cancer. The industry’s manufacturers even actively worked against the passing of laws to regulate the production of asbestos.

At this job, Steffen worked on two primary causes. The first was a lawsuit against a DePuy company. The company produced and sold metal-on-metal hip implants, but once the metals rubbed against each other, they released particles that could be dangerous to the people they’d been implanted in. Thus, the company’s hip implants were failing at much higher rates than those of other companies. Ms. Steffen and Dr. Egilman conducted research on the company’s study on hip implant performance, in which DePuy falsified study records and improperly transferred researchers in and out of the study. They also found that the study never received approval from the institutional review board (the independent ethics committee) and failed to receive consent from every patient.

Steffen’s second case was a litigation against Johnson and Johnson. Talc and asbestos naturally form together, meaning that mined talc contains asbestos. However, the company publicly claimed that talc did not contain asbestos, misleading epidemiologists and public health officials as they researched the association between talc and cancer.

Through her work with Dr. Egilman on these two cases, Steffen grew increasingly interested in the field of law. Although she’d initially planned to follow pre-med in college, like many IMSA students, the experience revealed to her that law was a broad field in which she could make a difference. She hoped to help victims of corporate corruption, but also affect change in the corporations themselves, through demonstrating to them the great range and extremity of their harm on others.

Today, Steffen has decided to continue her pursuit of law, now studying at Harvard Law School. In her daily life, she reads cases for each of her classes to prepare for her professors’ cold calling during class. These ‘cold calls’, in which students summarize readings, often leads students to discuss and debate the key components of these cases. Grades in her classes are based fully on a final exam over the entirely of the coursework. For Steffen, her classes have been enriching and interesting, requiring analytical and logical reasoning, and giving her new exposure to the many speakers invited to lunches. Her experiences with Dr. Egilman, where she examined companies who manipulated statistics to paint the picture they wanted consumers to see, was what first laid the groundwork for the work she’s studying to do today.

If law piques your interest, but you’re not applying to college with a pre-law degree, don’t fret! At Harvard Law School, Steffen quickly saw that students’ undergraduate majors spanned from political science to neuroscience. Being pre-law in college or going to a top university is by no means a prerequisite to being accepted into a prestigious law school, and there are many paths toward this degree.  As Steffen herself said, “When I was at IMSA, I applied to a lot of Ivy Leagues. I didn’t get into any. I got waitlisted at some. I remember, at the time, it felt like the end of the world. Everyone knew everybody’s business and was comparing each other… I’m [now] at Harvard. I feel incredibly lucky to be here, but I’m the same exact person who applied before. I may have different experiences, but I have the same abilities. I feel like in the end [the admissions process] is a little bit arbitrary and has more to do with your luck and what kind of class they’re trying to build. I would like to reassure students: [college acceptances] feel like the end-all-be-all, but they aren’t. The other thing I would say is that I had no idea that this is where I wanted to end up. I took time after college to just work and see where my interests led me, and I think that that was really valuable.”

Be the first to comment on "Career Pathways: From Medicine to Law"