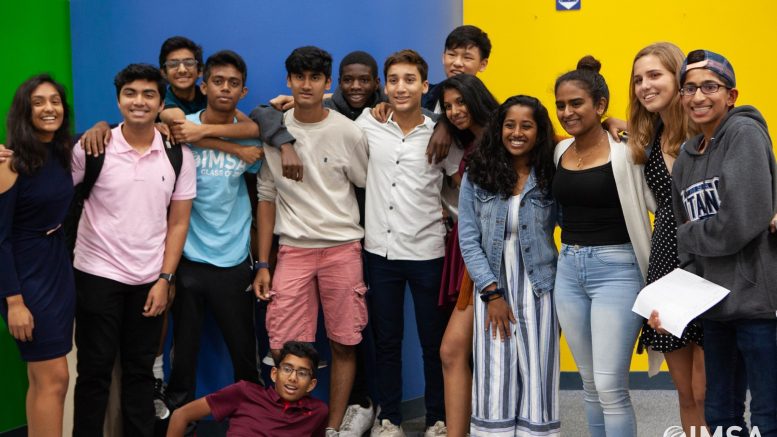 On “Thursdate” Thursday, students donned their fanciest clothing for dress-up day and spent midday break guessing the number of stars in CAB’s Jar of Stars. The class with the most correct guesses (209 stars) won the event; that went to the senior class, with juniors in second and sophomores in third.

Jar of Stars only had a 25-point difference between points awarded per place. The real chance to pull ahead before the drill event the following day came at Game Show Deluxe, the evening event of Day 4.

Game Show Deluxe featured plenty of new games, many closely related (some more tangentially than others) to the 2019 homecoming theme of Starry Night. The first event, Shoot for the Stars,  went to the juniors.

The next event required high precision and steadiness of hand, as the competitors attempted to skewer balloons without actually popping them. This event again went to the junior class.

The bamboo skewers from the balloon event came in handy in the next game, in which class representatives competed to get the most beads on a skewer in a specified amount of time. The seniors took the event.

The fourth event had the classes doing as many squats as possible while balancing a pair of dice on a Popsicle stick. This event also went to the seniors.

“Guess the Painting” and “Guess the Song” followed in quick succession, the former going to the sophomores and the latter being won by the seniors. Sophomores’ default answer for Guess the Song was “Lucid Dreams,” while seniors went with “Rex Orange County” if they didn’t recognize the song.

Finally, a balloon knockout event went to the seniors. Seniors raked the most points during the game show, followed by the juniors, then sophomores.

The daily riddle, which featured clues to various internet links, posed a challenge to classes. After analyzing a drawing of Sodexo’s vending machine, students had to make connections to generational names of a soda brand and an acronym created by the drawings’ name. Using this information,  they would traverse through TinyURLs to arrive at a Google Form, where a question asked about tomorrow’s dress-up day. Juniors rebounded from their loss in the gameshow as the only class to answer the riddle, yet still were unable to upset the seniors’ first-place lead.

The total scores are: