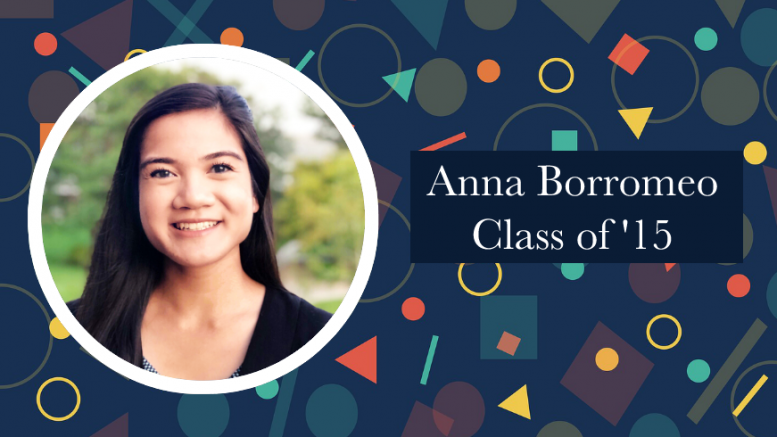 Like any archetypical IMSA student, when Anna Borromeo (‘15) first arrived as a fresh-faced sophomore, she imagined herself immersed in the fields of math and science. Yet, her ideas for her future took a drastic turn as opportunities at IMSA swept Anna towards a much different path. Now in law school, Anna is dedicated to uprooting the origins of poverty, an issue inspired by volunteer work and personal experiences.

As the daughter of Filipino immigrants, Anna has always been a close witness to the effects of poverty on others, yet it wasn’t until her SIR that she considered connecting her personal experiences with career. During her junior year, Anna worked at Northwestern Pritzker School of Law, doing research on the UN’s Millennium Development Goals (MDGs) the predecessors to UN Sustainable Development Goals and the Millennium Villages Project, which dealt with the implementation of the MDGs in rural Africa. “I did a lot of research on development economics [and] sustainable development, especially Sub-Saharan African countries,” Anna says. “That SIR project is really what made me focus more on trying to understand why is the poor getting poorer, why is the rich getting richer… and understanding how to eradicate poverty in general.”

After this experience, Anna worked to receive a Bachelor’s degree in economics from the University of Minnesota Twin Cities, where she also minored in global studies with concentrations in human rights and justice and East Asia. While she wasn’t certain from the start that she wanted to pursue a law degree, she says she became interested after observing the versatility of the occupation through her SIR. Even more importantly, she realized that understanding law and international business would help her to understand poverty. “I remember being in middle school and saying to myself, ‘I never want to become a lawyer,’” she adds. “How times really changed!”

Now, after her first year of law school at Case Western Reserve University, she says that it’s been an adjustment. Her background, from IMSA to her quantitative economics degree, was “always problem sets, and problem-solving, and math calculations.” In law school, she reads all the time. Beyond that, there’s a critical difference between the mentality of undergraduate and graduate students. “Everyone is there because they want to move their career a step forward,” Anna notes. “You realize how much responsibility you have as you’re developing into a future attorney.” Her first year of law school “required a different kind of stamina” than school ever had before, but has left her excited to continue her studies.

In between years of studying, Anna has already done some exciting work. This past summer, she completed an internship in Geneva, Switzerland, with the International Trade Centre (ITC), a joint organization supported by both the World Trade Organization and the United Nations. Specifically, Anna worked under the Myanmar Trade and Investment Project (TIP), where her legal background gave her a unique perspective among colleagues who were mostly focused on economics. While working under Myanmar TIP, Anna helped “draft operational guidelines on trade advisory committee systems,” which included promoting communication between the public and private trade sectors in Myanmar. She also identified policy issues involving trade and researched the status of modern-day slavery in Myanmar. Anna concludes, “It was a really awesome opportunity to be surrounded by so many talented and motivated people who want to be leaders of the world and who are very interested in solving a lot of the issues we have in the world.”

For people interested in Anna’s work in international development, she recommends reading global news, doing research, and reaching out to your professors and the people around you for opportunities. She also adds that she remembers coming into IMSA with a similar mindset to everyone else, but ultimately veered towards a personalized, uncommon path. “I remember struggling at first at IMSA,” she says, “because it’s really easy to get into a competitive mindset… but I think it’s important to make sure that you’re not competing with anyone but yourself.” Anna is grateful for her time at IMSA, which she says helped her meet a lot of different people with valuable perspectives and develop her analytical skills. Ultimately, Anna says, “The path you take is never going to be the same path as anybody else.”

Be the first to comment on "Career Pathways: Veering Off the Expected Path"