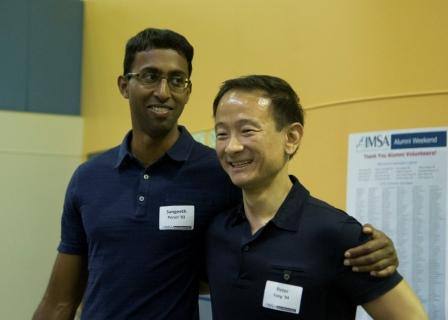 Almost 5000 students have graduated from IMSA in the 24 years since its charter class. 99% have gone to college, 60% earning degrees and eventual occupations in STEM. IMSA alumni have gone on to become CEOs at large companies, been featured on TIME’s “100 Most Influential People in the World” list, and designed popular websites like YouTube. But even after they have successfully pursued their passions and advanced in the world, many don’t forget IMSA’s impact on their lives. Cumulatively, IMSA has received over $2.5 million and counting from generous alumni, with more than $450,000 being gifted in 2012-2013. Many substantial alumni donations come in once in a while as well. One notable gift came from Steven Chen, co-founder of YouTube, who donated $1 million last semester to fund IMSA’s upcoming Innovation Hub. The creative, rigorous academic program pushes many students to achieve much more than they could at other schools and Chen recognized this, wanting to give back as “IMSA helped guide [him] to the tools and knowledge [he] needed to develop [his] ideas into a successful business.”

But alumni today aren’t only known by their financial contributions to IMSA. Many  leave legacies in academics, sports and the  community. Their lasting presence on campus is shown by the fact that every year around major school breaks, an enormous number of alumni visit their friends, teachers and RCs. Juniors and seniors excitedly flock towards their dearly-missed friends while sophomores only see unfamiliar faces. Alumni frequently spend nights when they visit to catch up and reminisce with their underclassmen. Then, every year, the cycle repeats with a new group of alumni, seniors, juniors and sophomores. A particularly popular time of year for alumni visits is around Clash of the Halls week. Recently graduated alumni oftentimes don their respective hall t-shirts and join the rowdy crowd of cheering high-school students during the culminating event of Clash: Pep Rally. Even after graduating, many alumni still want to play a part in the residential community that they lived in during the majority of their high school career.  In addition to financial support and visits, many alumni also help facilitate intersessions or other volunteer programs for IMSA and its students.

The long-lasting relationships IMSA has with its alumni demonstrates how the Academy becomes a very important part of many students’ lives. In only three years, IMSA’s academics, teachers, RCs and residential community clearly leave a mark on many alumni. And whether it is in the form of a monetary gift or social visit, many graduates want to maintain their connection with the IMSA community because of the unique experience it offers.

Call it Hell, Call it Stress, Call it Torture… I Call it Home

Be the first to comment on "Alumni Relationships With IMSA"