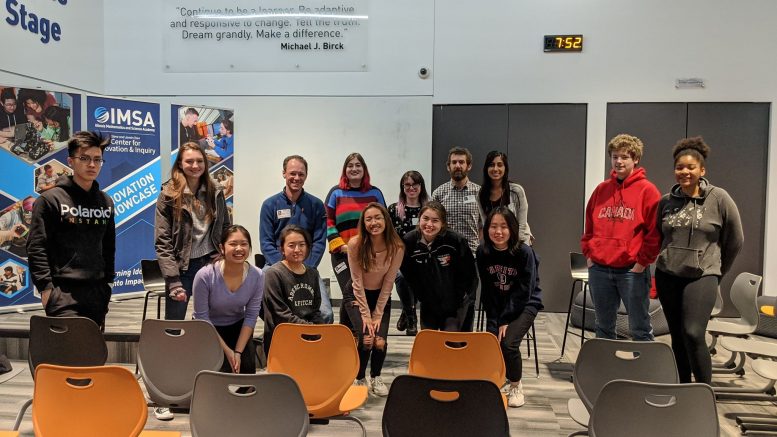 On Monday, January 13th, Student Council invited five IMSA alumni to visit and share their thoughts on college admissions and their careers after IMSA.

For Nikki Mastrud (IMSA Class of ’15), their distinction as a National Merit Finalist earned them a full ride from the University of Arizona. Though they had acceptance offers from more prestigious, private universities, Mastrud ultimately accepted the full-ride offer. They graduated from the University of Arizona in December 2019, with a major in microbiology and a double minor in public health and women’s studies.

In regards to their college choice, Mastrud stated, “I viewed it as a choice on whether to graduate with $100,000+ in debt.” After earning a B.S. in microbiology, Mastrud planned to potentially go for their master’s and PhD later, so getting a free ride for their undergraduate degree made it financially feasible for them to continue to higher education.

Mastrud concluded that you can be successful at any college — public or private — if you find your academic niche, such as by joining the honors program at a public university.

Colby’s takeaway from his experience was, “You can screw up plenty of things, and still do really well in life.”

However, he emphatically discouraged anyone from trying to imitate his method of getting a college degree.

Sharon DeCaro (’03) attended Monmouth College, a relatively obscure liberal arts school in southern Illinois. As a member of Illinois’ All-State Choir, DeCaro wanted to continue her music studies in college, leading her to double-major in pure math and music. After graduating, her first job was an entry-level data entry position. She moved on to doing quality assurance (QA) software testing, and currently works as a full-stack software engineer at a health pharmacy company.

Viveka Patel (’13) went to the University of Illinois at Chicago for an undergraduate degree, as it offered her a full-tuition scholarship. Since she had guaranteed admission to the UIC medical program, she said that it “took a lot of pressure off [because I didn’t have to worry about] med school applications,” allowing her to enjoy her undergraduate years.

She also noted that Ivy Leagues and similar schools tend to foster high-pressure academic environments. In contrast, the lower-stress courses at UIC provided opportunities to “do stuff that [she] might not have been to do at a more prestigious school.” Bigger schools, she explained, have a ton of opportunities in both academic and non-academic spheres. “You just have to take advantage of them.” She discussed how she had the flexibility and freedom to join clubs and take electives completely unrelated to her major.

At public universities, IMSA students will probably be some of the best academically. In choosing a college, Patel encouraged students to think along the lines of “where can you make a difference?” She gave the example of becoming student body president. At a college like Harvard, there are so many other strong students that even an IMSA student would only a slim shot at the position. But at UIUC, an IMSA student would stand out more, be able to take advantage of more opportunities, and enact change — a “big fish in a big pond,” to use the traditional analogy.

Asher Kach (’97) applied to exactly three schools as a high school senior: the University of Illinois at Urbana-Champaign, Stanford, and the California Institute of Technology. Stanford rejected him, leaving him to choose between UIUC and CalTech. He ultimately chose the former and received an undergraduate degree in computer science.

For people making similar decisions, he noted that schools like CalTech and MIT are much more specialized in STEM, with limited learning opportunities in the humanities. “If you’re sure that you’ll major in STEM…then attend a specialized STEM school,” he advised. “But if you’re not sure about your major yet, then big schools like UIUC just have a lot more options.”

Another reason for his choosing UIUC was because it was a three-hour drive from his house, so, “My parents couldn’t pop in weekends, but I could go home if I wanted.”

Upon graduating from UIUC, he got job offers from Microsoft and National Instruments. Instead, he went for his master’s degree at the University of Wisconsin at Madison, and then went on to receive three postdocs in five years, one of which was done in New Zealand.

By this point, he decided it was time to quit academia and get a “real job.” He got a job at Google, quit for two years to work at a nonprofit, then rejoined Google and still works there today.

The main factor influencing these five IMSA alums’ college decisions was money. Viveka Patel acknowledged that probably not many IMSA students think about money, but asked the audience to consider, “Why are prestigious schools such a big deal? How worth it is that to you? Even if money isn’t a factor, think about where you can stand out.”

Be the first to comment on "IMSA Alums’ Thoughts on College"