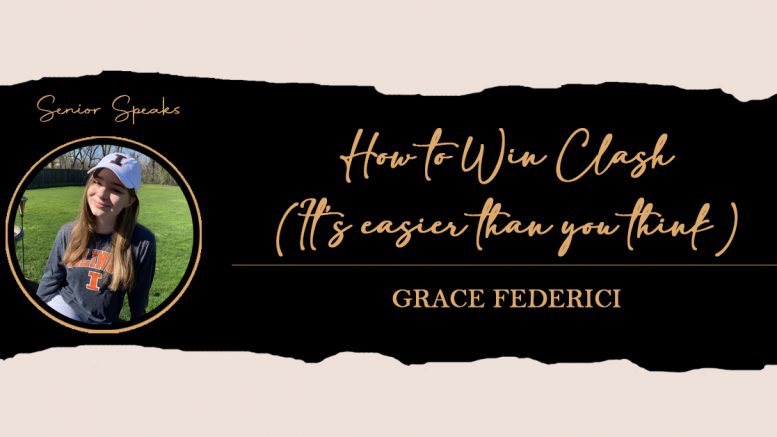 One of the sections included in the annual Senior Edition is a series of essays titled Seniors Speak. These works are written and submitted to The Acronym by members of the graduating class, allowing them to reflect on their experiences, share advice, and advocate for change. This writer of this piece is Grace Federici (UIUC ‘24), who lived in 1506D wing during her senior year, serving as a wing guide in 06 for two years. She was also on the diving team and director of the IN2 project June’s Learning Laboratory. Most importantly she was a CAB member since the end of her sophomore year, dedicated to making campus a more carefree place.

Walking out of the main building towards 06, Cait and I toted the remainder of the Clash banners that had been hanging in Old Caf for the month prior. They were the only remaining physical evidence of all of our Clash prep. Not so long ago we’d painted those banners, giggling excitedly over our brand new color choices and discussing themes our halls had thrown around. It felt so strange to be standing on the other side of Clash. It was finally over.

Unbeknownst to us, we were walking out of the main building for the last time. IMSA was over.

I miss it dearly. Our premature end left me wanting desperately for the rest of our senior year which will never come, or even just one more day for saying goodbye. However, I can’t let that overshadow everything that I did get to experience. Clash this year was an unforgettable, last time together, and the perfect end to my time at IMSA (even if not the typical end). This school gave me so much, but above everything else, CAB was its finest gift. It is hands down the craziest, funniest, kindest club, made up of my absolute favorite people with whom there is never a dull moment. So, I want to share with everyone a piece of the best part of IMSA: a peek into the mind of CAB and a tribute to our final days together, based on Cait and I’s parting conversation.

Winning Clash is actually pretty easy, and here’s how to do it (based on personal observations):

Step One: Picking Your Theme.

First things first, you have all year to throw around ideas for themes because after all, the color should only be used as a tool to accent your theme – not the other way around. In this way, not only will you have maximal time for ideating and picking out the absolute best theme for your hall, but you’ll be planting the seeds of Clash excitement in the minds of your brand new underclassmen.

The biggest decision when it comes to choosing a theme is whether you will go edgy and complex or straightforward and lighthearted. Neither is better than the other, but it is important to pick the theme which suits your hall and then take it  in a clear direction. For example, 06 always chooses the latter, going for broader, non-experimental themes like  Retr06, Comic#6, and Aer06. They were all typical 06, but I think a weak point with Comic#6 was its broadness, which made it unclear whether the comics or their contents were the focus. On the other hand, Retr06 was a strong theme: something that the judges could easily understand, enjoy, and award points for on the many rubrics upon which they grade events based on theme incorporation.

By the time Clash week rolls around, it starts to feel like a game of Clue to me, the outcome of the game placed in the center of the board, just waiting to be opened. The winner is already decided by the month of planning that has already taken place, the movie is submitted, the t-shirt is ordered, and the drill choreo (for the most part) is set in stone. Yes, the results of the no-prep events matter, but you don’t need to bank on those points if everything else you have is completely solid. Drill, the most weighted event, is worth up to 900 points and easily rocketed 07 from last place to 5th last year after one of my personal favorite performances.

So, it is very important that each hall gets their very best to head these events. Mural and T-shirt need the most talented artists. But it’s more complicated for the other events. You can’t just have people who have a vision or who are good leaders; you need both. You need people who are reliable, capable of bringing everybody together, and infectious in their hall pride.

Even if your theme is not tailored towards the judges, everything else should be, because at the end of the day, they are the people who pick the winners of Clash.

Here’s a tip: Read old rubrics that CAB has released in the past. If the judges left comments, they can give you a sense of direction on what will and will not appeal to them. Yes, you probably won’t get those exact judges, but the list of faculty willing to participate in Clash is frankly barely long enough to get all the judges we need.

Besides that, using concepts that are familiar and relatable to the judges is key in scoring well. For example, two back to back winning themes, Retr06 and Back to the Fuch5ia, played on times and concepts that created an invaluable factor of nostalgia. While during this year, students went wild over drill songs like The Box and Blueberry Faygo, the judges in our sophomore year got to hear some of their favorite Micheal Jackson and the Backstreet Boy classics in 06’s winning drill. We also chose 07’s glorious hacker film as the audience favorite (something CAB instated to give back some of the judging power to the students), but the 06 movie still won in the judges’ eyes and scorecards because, ugh! Plane struggles! They could relate to and laugh at the content of the movie. Ultimately,  Clash is restricted by the need for judges, so even though tailoring your Clash content to adults in order to do well is not ideal, it is a surefire way to make them feel excited about being involved in Clash.

While only a few people do the bulk of the work for events such as movie, talent show, drill, mural, etc. it is of the utmost importance that each hall brings as many bodies as possible to the weekday events. I wouldn’t say that any of them require any skill. Riddles and game show are some of the most variable events, spawned from the deep depths of the collective CAB brain and its last-minute panicked substitutions. However, with more people, there is a greater likelihood that someone around will possess detailed knowledge on obscure fashion pieces, know how to fold the world’s best paper airplane, or have the same music taste as the CAB member who made the Guess That Song playlist (oops, that was an oversight on our part). Similar to how you choose your heads, you shouldn’t have to appoint just people who are willing to volunteer but people who can actually, hopefully, give you a leg up. For instance, pick a Wii Sports Resort player who had indeed played Wii Sports Resort before because for the past two years, the winners were, in fact, the owners of one of the disks CAB borrowed for the event. The more willing participants you have and the more that you know the talents of the people in your hall, then the better chance you have of taking home all of those extra points, which can make a world of a difference. This year, the margins between final scores were as low as 25 points, which was all that stood between 05 and 06.

While I’ve never really tested these steps out, I feel confident in sharing them because, well, I’ve never not won Clash. After 06’s historic win sophomore year, I only experienced the event through CAB, and let me tell you, CAB is such a win.

In all honesty though, I don’t care who wins what or how. What matters is that Clash makes you feel like a winner. So, make the most of it, no matter the outcome. Cheer for yourself and your hall. Revel in the experience of being and working together, not letting something so silly as points and placements sour it. Be like 07, rushing the main gym floor at the announcement of being in 7th place because after all, that means they’re in 07th place, and that’s something to be proud of. Celebrate your temporary home and your lifelong friends because your time to dance, cry, and cheer all together might be gone sooner than you think.

Seniors Speak: The Most Confusing Emotion

Be the first to comment on "Seniors Speak: How to Win Clash (It’s Easier Than You Think)"