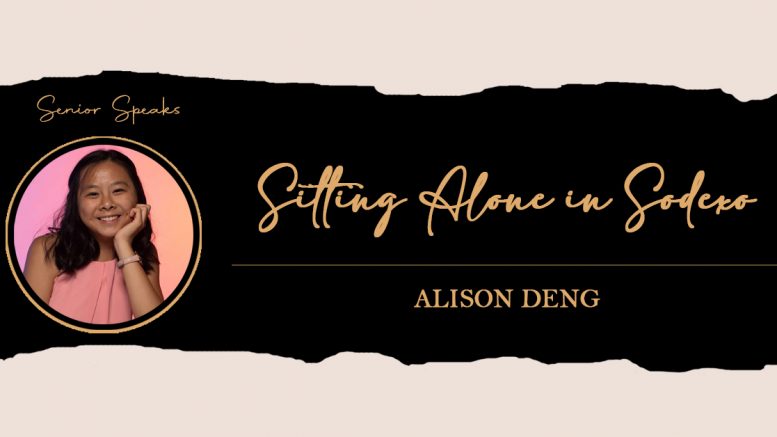 One of the sections included in the annual Senior Edition is a series of essays titled Seniors Speak. These works are written and submitted to The Acronym by members of the graduating class, allowing them to reflect on their experiences, share advice, and advocate for change. The writer of this piece is Alison Deng (WashU ’24), who lived in 1502A during her senior year. She actively worked on community service projects through Key Club.

I used to always ask my friends to go to Sodexo with me. When they couldn’t, I would join a random table even if I only knew one person there.

I was obsessed with being socially accepted at IMSA. I was super self-conscious about what others had to say about me. I wanted to be in the crowd. I wanted others to hear my name and know who I was. I felt the need to please others.

Junior year, as my relationships with those around me fell apart, I was left with no one to go to Sodexo with, walk to the TV Pit for SIR in the mornings, or talk to in general. The insecurities of what others were thinking always rushed back to me: have they heard the rumors? Do they know what happened?

In the hallways, I kept my head down while walking and pretended to be scrolling through social media to look busy, avoiding the gazes. I always kept my earbuds in – sometimes, I wouldn’t even be listening to music. I just liked the comfort of having something to relate and listen to.

My favorite table in Sodexo is the one in the back corner, close to the stage. It’s so hidden that no one ever realizes it exists. I highly recommend it. I took it as a time to catch up on the news, reflect on what’s happened over the past week, and let my mind wander. I learned that I wasn’t scared of going alone, but rather, others’ judgment of sitting by myself. I found that it really was a mental block that I had to get over. I still felt everyone’s pitiful gaze on me, but instead, I learned how to care less. Occasionally, I even began to embrace the freedom that I had of eating alone. There was no one around to impress with witty jokes or keep up with awkward small talk.

I found that I could surround myself with a bunch of people and still feel empty and unsatisfied at the end of the day. It was a complicated feeling, but I felt I could always connect to music. As Lauv sings in “Modern Loneliness,” “We’re never alone, but always depressed.” To me, in the context of IMSA, it speaks to how we live right next to each other, yet we stay confined in our own cliques. I can’t count how many times I’ve said that I would visit someone, yet not followed through because of the limited amount of time. I’m sorry to those people. I got so caught up in the work of IMSA that I took for granted the many friends that were living right next to me the whole time. I started to expand my circle of friends, talking to some seniors who I never had before. While I made some progress building new friendships, inevitably, the seniors graduated, and I was once again left alone.

Senior year came around, and I tried to reach out to others to go on walks to relax and take a break. When it seemed like everyone was busy, I would again put in my earbuds and walk around campus. I enjoyed these walks, especially; I had time to think and truly clear my head. One day when walking around with two friends, we witnessed someone walking alone, and one of them remarked that those who go on walks alone are “psychopaths.” I defended the lonely walk, confessing that I belong in the group that enjoys being alone sometimes. However, she only more clearly asserted her position.

That was the philosophy that a lot of my friends held too. Makes sense, as in residential life, we’re always encouraged to sit by someone if you see them sitting alone or ask someone to join us if they’re alone. There’s a certain stigma surrounding those who are always alone. No matter how hard we fight, it’ll preside. I’ve really found that sometimes ignorance is bliss. As long as you’re content, then forget the rest.

Nonetheless, I still found my group senior year. I opened up and found a welcoming community where I can share my accomplishments and misfortunes. Take chances, reach out to people you’ve only talked to once. Relationships are two-sided. Demonstrate your trust and who knows, maybe you’ll be met with an equal amount of support.

Seniors Speak: Looking Back on Senior Year and COVID-19

Seniors Speak: You Will Never Be Perfect (Please Stop Trying)