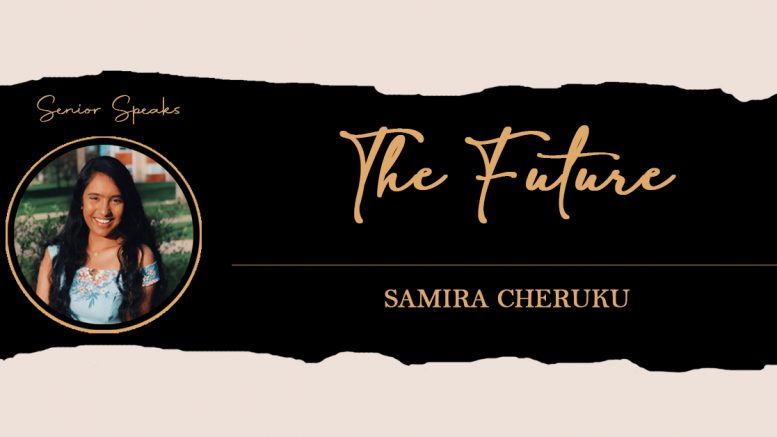 One of the sections included in the annual Senior Edition is a series of essays titled Seniors Speak. These works are written and submitted to The Acronym by members of the graduating class, allowing them to reflect on their experiences, share advice, and advocate for change. The writer of this piece is Samira Cheruku (UT-Austin ’24), who lived in 1502B during her senior year. She was actively involved in culture shows all 3 years and was on board for Habitat for Humanity.

What do you tell someone when they either receive a rejection, bad news, or are nervous to face something? How do you comfort them? Along with love and praise, many people will say: “Everything will work out,” or “Trust the process.” What is so simple to say, yet so hard to believe in the moment, has proved to be a struggle for me on numerous occasions throughout my IMSA journey. You would think that hearing those phrases from upperclassmen who have quite literally gone through the same or similar experience before would be reassuring, but for some reason, it’s still hard to believe. Especially during the college application and decision seasons, I struggled with my fears for the future and how everything would turn out. While dealing with the future as my biggest fear, I realized I had feared so many things over my IMSA career that ended up contributing to the rising doubt in my abilities and about my identity. Since fear is what holds many of us back from reaching our full potential, I wanted to document some of the takeaways that I learned from my time here.

If you’re scared of tomorrow, think of the things you can control today, the things you have now. Think of just today and how you can get through it. Think of how you can make this day a good day in case history repeats itself tomorrow. Think of making today count, because maybe that is the only possible way you can prepare for tomorrow. For many individuals, having that sense of control and stability for the day will give them a sense of purpose, making the next day less scary.

If you’re scared of failure, think of the regrets you have because you didn’t try in the first place. Think of the “what ifs” and “if onlys” you asked yourself when you felt that life was passing you by. To put it bluntly, failure is a part of life. In the moment it can cause you to doubt and think less of yourself, especially when you compare yourself to others, but encourage the mindset that sometimes you need to fail to succeed. In other words, think of failure as another chance to try again and build yourself up even more, rather than a concept that defines success as a measurement of self-worth.

If you’re scared of missing out, try everything you have the slightest interest in. Numerous extracurriculars and clubs at IMSA provide students with diverse opportunities to get involved on campus and among your peers. So many students, including myself, became more interested in dance after participating in a culture show, thrived from being challenged through competitions in a field that they wanted to pursue in college, and developed stronger leadership skills that wouldn’t have grown as much without board positions at IMSA.

If you’re scared of disappointing others, focus on putting forth your best effort. The only person you need to prove your abilities to is yourself. If you put forth one-hundred percent, there is no room for “what if I did this.” Prioritizing and time management are key in structuring your time  to focus your attention and effort to one task after another.

If you’re scared of not being enough, think of the story of the twenty dollar bill. A well known speaker started his seminar by holding up a twenty dollar bill. He asked who in the audience would like the bill after he crumpled it, then again when he dropped it on the ground and stepped on it, and yet many raised their hand and still wanted it because it was still a twenty dollar bill. Dirty or clean, crumpled or finely creased, your value never changes, you are still priceless to those who love you and those who will love you.

By assuming the worst first, you are holding yourself back. Taking risks, putting yourself out there, and believing in yourself isn’t easy at first, but it will produce a great reward: if you succeed, that brings happiness and a sense of accomplishment, and if you encounter a failure, it can only make you better.

We are always scared of the unknown. We fear that the future will mirror our past, because we are born to believe that history repeats itself. But human beings are not history — we want to reinvent ourselves instead of repeating ourselves. If you are scared of the future, try to see it as a challenge rather than a threat, a journey that is only yours, a compelling story that is still unfolding. When asked the most cliche question in different forms: “Who, in the past, present, or future, would you choose to have dinner with in the whole world?” I always respond with, “my future self.” However, as much as I want to have a conversation with my future self who I envision telling me that “everything will work out, just be patient,” sometimes knowing the ending ruins the story. Knowing that life is all about the journey, I choose to embrace the twists and turns, and ups and downs, of the future.