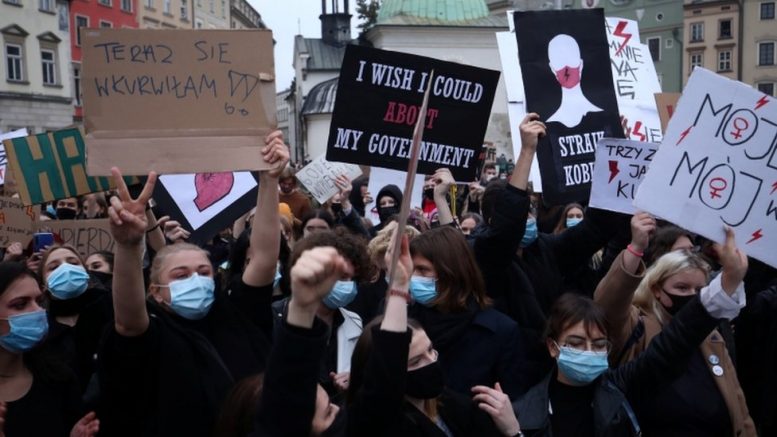 Poles fill the streets in protest against the court's ruling on abortion | photo: BBC

On October 22, 2020, Poland’s Constitutional Tribunal ruled that abortions due to fetal defects are illegal. This ruling bans almost all abortions, the only exceptions being cases of rape or incest, or when the mother’s life or health is at risk.

Before this, Poland’s abortion laws were already among the strictest in Europe. Every year, only about 1,000 legal abortions occur in Poland, while women’s groups estimate that about 100,000 abortions are performed either illegally or abroad, in order to get around the tight restrictions. However, as of 1993, the law also permitted abortions in cases of severe fetal disabilities, which accounted for 98% of legal abortions in Poland. Last year, a legal challenge against this law was launched by MPs from the ruling nationalist Law and Justice party (PiS), which resulted in the ruling that the abortion of malformed fetuses is unconstitutional. This change met a lot of backlash from the people of Poland, even though it is one of Europe’s most Catholic countries. In 2014, an opinion poll by the CBOS research center found that 65% of Poles surveyed were against abortion, 27% saw it as acceptable, and 8% were undecided. However, opinion polls since then have found that most Poles were against the tightening of the law.

What followed was a series of Poland abortion protests that quickly spread across the country. On October 23, only a day after the ruling, protests were held in Warsaw, Poznan, Wroclaw, Krakow, and many other cities. Protests also took place outside the Polish Embassies in London and Kyiv. In the capital Warsaw, protestors marched to the home of Jaroslaw Kaczynski, who heads the governing Law and Justice party. There, police used pepper spray and physical force against protestors when protestors threw stones and tried to push through the cordon around the house, and it was reported that 15 people were detained. Not only did the protests go against Poland’s ban of gatherings of more than five people, which was created as a strict measure against coronavirus, but protestors also disrupted church services, graffiti was sprayed on the walls of Warsaw churches, and protestors blocked main intersections, preventing cars and trams from passing through. They carried candles and posters with different messages such as “This is war” and “I wish I could abort my government.” Protests continued to occur after this day, with blockades occurring in about 50 cities across the country on October 26.

The organization behind the abortion protests is the All-Poland Women’s Strike, which aims for a return to the former law. However, those participating in these protests are not all part of the feminist movement. Some protestors have anti-government slogans, and although they are traditionally conservative voters, they support the protests because of their anti-government views. Meanwhile, some protestors are anti-church and their support for these protests is fueled by their frustration at the power the Catholic Church holds in Poland. On the other hand, not all women support the protests. Some pro-life women who do not support these protests want to protect the defenseless, unborn children, and they ask “If everyone has a voice, why don’t disabled children?” Other women who have not participated in the Women’s Strike are against the way these protests are being carried out, disagreeing with the vandalism of churches as well as religious and patriotic monuments, and saying that the vandalism and aggression displayed in protests insult women’s dignity.

Platypuses: the Freaks of Biology