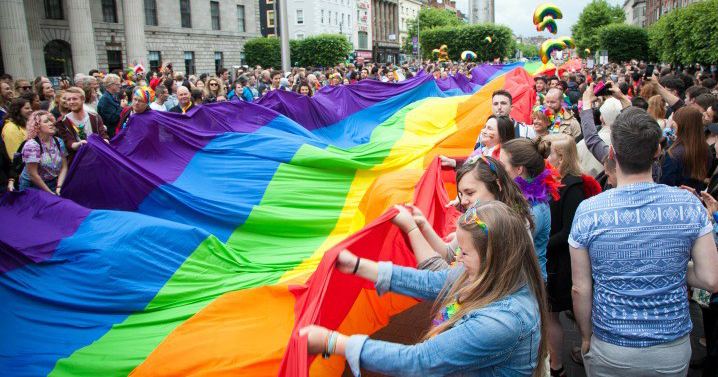 Each year on the eleventh day in October, National Coming Out Day (NCOD) is celebrated by thousands of people of different sexual orientations/gender identities and allies. On this day, workshops, speak-outs, rallies, and a multitude of other events are held, bright, glittering pride flags are raised, but most importantly, negative stereotypes against the LGBTQ+ community are broken. Robert Eichsberg, the founder of NCOD said, in a 1992 interview, “Most people think they don’t know anyone gay or lesbian, and in fact everybody does. It is imperative that we come out and let people know who we are and disabuse them of their fear and stereotypes.” And National Coming Out Day does just that. From a former GOP congressman to a Tony Award-winning actor, a long list of notables and celebrities came out as LGBTQ+ this year on NCOD, inspiring an uncountable wave of individuals to seize their identities with pride. NCOD is undeniably a uniting force for the LGBTQ+ community against ideals ingrained into society by years of homophobia, which raises a new question– how does IMSA celebrate its population of LGBTQ+ students?

This question is answered by SPECTRUM, IMSA’s very own LGBTQ+ club, in the form of Coming Out Week, which harnesses the magic of NCOD and spreads it across an entire week jam-packed with educational events and games. Coming Out Week satisfies the need for an outlet of support and recognition for IMSA’s LGBTQ+ population. Concurrently, it also educates the rest of IMSA’s students and staff about issues facing the LGBTQ+ community. Just recently, I (digitally) sat down with Akanksha Garg (’21), a senior at IMSA and the president of SPECTRUM, to hear her perspective on Coming Out Week.

For Akanksha, Coming Out Week is “an opportunity for us to dedicate a week to holding events about topics that we feel passionate about, and we also get an opportunity to teach others about things that they might not know.” These events, a healthy mix of educational and social, are at the heart of Coming Out Week, and to have a thorough understanding of its purpose, we must first take a good look at each individual event and its goal.

Day 1: The first event was held on Monday, October 5th, and it focused on the impact of COVID-19 on the LGBTQ+ community. As abstract as many of the effects of the pandemic are, this virus disproportionately affects the LGBTQ+ community. According to Akanksha, “members of the LGBTQ+ community are more likely to experience pay cuts during this pandemic… since they are more likely to work in fields that are highly exposed to the virus.” Her words, although surprising to me at first, are backed up by recent studies. Brian Andrade, an Associate Dean of Practice at the School of Public Health, notes that “LGBTQ adults experience higher rates of chronic conditions, such as cardiovascular disease, obesity, cancer… and are more likely to engage in risky behaviors than their straight and cisgender peers– conditions and behaviors that can increase vulnerability to this novel coronavirus.” A clear understanding of how the pandemic affects minority groups is just as important as understanding the physical symptoms of the virus.

Day 2: The second event addressed the different styles of voguing and the subculture of ballroom dancing. Furthermore, it explained the different categories in which people compete as a part of these balls. A dangerous myth is the assumption that LGBTQ+ individuals were sheathed in isolation and invisibility until the 1960’s– this mindset could not be farther from the truth. History has unearthed a world of strong LGBTQ culture in “vogue,” a highly stylized form of dance created mainly by black and Latino LGBTQ communities, and between the 1960’s and 80’s, New York drag competitions known as “balls” evolved from delicate pageantry to “vogue” battles. Although the style of voguing has transformed over time, it still offers the core principles of identity and belonging for LGBTQ+ individuals, and is a key contribution to modern LGBTQ+ culture.

Day 3: How to be an ally. Being an ally for those targeted by oppression is the best way to combat years of prejudice towards the LGBTQ+ community. The importance of all people to have a willingness to act with and for others in pursuit of creating equality cannot be understated, and while change takes time, SPECTRUM does a great job of providing IMSA students with ways to get involved. Below, a guide for the everyday student’s journey in being an ally:

Coming Out Stories was also held that night, where students had an opportunity to share their stories, either publicly or anonymously, in a safe and supportive environment. Finally, the week ended with a Kahoot regarding LGBTQ+ history.

Despite setbacks associated with a virtual backdrop including issues with event coordination and time restrictions, Coming Out Week was a success. For Akanksha, “the events of Coming Out Week are an opportunity for us to talk about things that aren’t really… well-known, and I think that it does help the LGBTQIA+ students and staff feel a little more supported and welcome.”

Yina Wang is a sophomore from Naperville and would be living in 01C (if not for, obviously, a raging pandemic). You can usually find her picking up new hobbies, on her way to annoy her siblings, or sleeping. She's excited to navigate through her first year on the Acronym, and in the future, hopes to contribute to its growth!