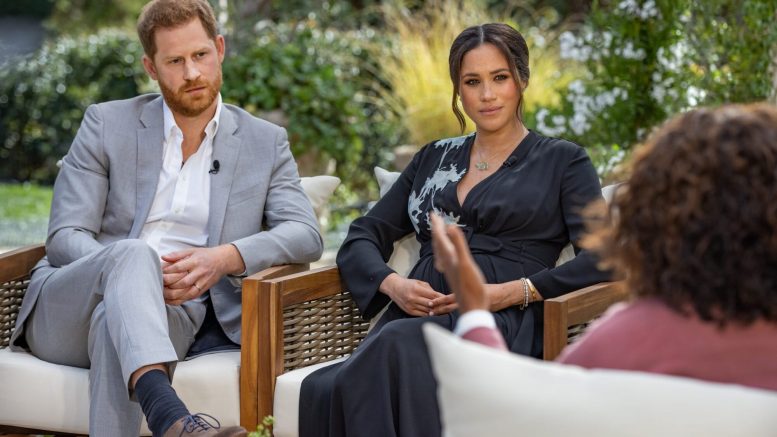 Content warning: mention of suicidal thoughts and thoughts of self-harm

On the 7th of March, 2021, Oprah Winfrey sat down with Meghan Markle, Duchess of Sussex, and her husband, Prince Harry for an interview. The 86 minute interview began with Meghan and a discussion of her struggles with being a Royal, motherhood, and the racism she endured from the press. When Prince Harry joined Meghan, they revealed their new baby’s sex and discussed Harry’s conversations with a royal family member that was concerned about baby Archie’s skin color.

Meghan revealed that when she began dating Harry, she did not do any online research on him. She exclaimed that “thank God” she did not, as it made her interactions with the royal family less stressful.

On the subject of Meghan and Harry’s marriage, Meghan told Oprah that three days prior to the televised wedding, the couple got married in their backyard by the Archbishop of Canterbury.

Meghan has a tough relationship with the British tabloids because oftentimes they portray her in a harsh light. Back in November 2018, the tabloids reported that Meghan made Kate Middleton, Duchess of Cambridge, cry due to a fight about Princess Charlotte’s flower girl dress. In the interview, Meghan said that it was the other way around: Kate made Meghan cry. However, when the tabloids blamed Meghan for making Kate cry, Meghan said that the royal family did not correct them. Meghan called this a “turning point” in her relationship with the royal family.

While Meghan was being solo interviewed, she revealed that while she was pregnant with Archie, Harry had a conversation with a family member where they expressed concerns that baby Archie’s skin could be dark. During Harry’s portion of the interview, he discussed the matter in more detail, and later Oprah clarified that it was not the Queen or her husband, Prince Philip. Neither Meghan nor Harry revealed who was involved in the conversation about Archie’s skin color.

As for the couple’s second child, it was revealed that the Sussexes are expecting a girl. They also mentioned that they have no plans for more children.

In one of the interview’s darkest moments, Meghan revealed that following her marriage and the assumption of royal duties, she struggled with “constant” thoughts of suicide and self-harm, saying that she “just didn’t want to be alive anymore.” Meghan reached out for help. She admitted these thoughts to Harry, and she turned to the human resources department at the palace. They denied her help because they said she was not an employee.

When the couple decided to step back as senior members of the royal family and move away, security was not provided to them. Despite death threats, the palace cut them off from royal protection. When the couple moved to Canada and then to the United States, Tyler Perry, a Hollywood director, offered them use of his house in California for security.

The day after the interview, Oprah went on CBS This Morning and shared her thoughts on what the conversation revealed. Also, over the course of the next week, more unaired clips from the interview were shared, as more than three hours of interview footage had been cut down for the original broadcast.

The following day, on the 9th of March, 2021, Queen Elizabeth II issued a statement regarding the conversation of Archie’s skin color. She stated that “The issues raised, particularly that of race, are concerning. While some recollections may vary, they are taken very seriously and will be addressed by the family privately. Harry, Meghan, and Archie will always be much-loved family members.”

We Have Questions, Seniors (and Alumni)!