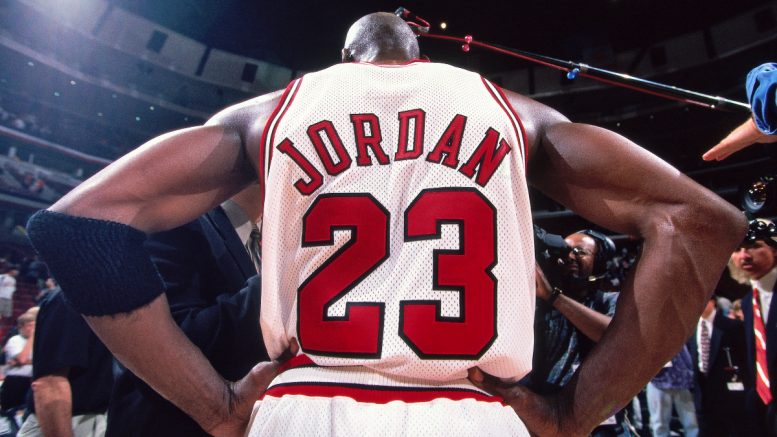 His Airness. Air Jordan. GOAT. Who in the world could I possibly be talking about…

Michael Jordan is considered by many to be the greatest player to ever touch a basketball. As soon as he joined the NBA, the league saw an immediate increase in ticket sales and overall performance. He also revived the franchise he was drafted by, in the Chicago Bulls. While many legends came before Michael Jordan, you could consider Michael Jordan the beginning of the modern-day NBA.

Michael Jordan wasn’t always known as a great basketball player. In high school, he tried out for varsity, but was deemed unfit for the sport. When he grew to 6’3″ in the summer before his junior year, and his path to stardom began. Michael Jordan chose to attend the University of North Carolina and while he was overshadowed by some of his upperclass peers, in the NCAA championship against Georgetown, Michael Jordan shined with a game-winning shot to go along with his 16 points and 9 rebounds. After this game, he began receiving more attention, and in his sophomore and junior years, Jordan won the College Player of the Year award as well as the Naismith and Wooden awards. After his junior year, Jordan declared for the draft and was chosen by the Chicago Bulls with the third overall pick. Here’s where we get to his GOAT case.

In Jordan’s rookie year, he averaged 28.2 ppg (points per game), 6.5 rpg (rebounds per game), and 5.9 apg (assists per game). Keep in mind, this was his rookie year! With these numbers, he led the Bulls to the playoffs after their prior multiple year drought. While they lost in the first round to the Milwaukee Bucks, Jordan made his presence in the NBA known. After his rookie year, he suffered an injury and was unavailable in his second season. However, when he came back in his third season, Jordan went on to average 37.1 ppg, 5.2 rpg, and 4.6 apg. This became a constant in Jordan’s career, as he would go on to average 30+ ppg in his prime years. Jordan led the bulls to the playoffs in every year he played for them, barring injuries, but the Detroit Pistons stood in his way towards his earlier years. Jordan always put up tremendous numbers, but the Pistons, perhaps as a sign of fear, resorted to pulling out some of the hardest fouls in order to stop him. Even with these fouls, Jordan took them to a 6-game series in 88-89, and a 7-game series in 89-90. The Bulls in these years were virtually a lottery team (high draft pick as a result of bad performance in the regular season) without him, so Jordan was carrying the Bulls to these playoff appearances, but he came up short. This stayed true until 90-91. In this season, Jordan led the Bulls to their first of many finals appearances, and they played against the Los Angeles Lakers with Magic Johnson. The Bulls won under Jordan’s leadership, and in the following years, had two three-peats. One was from 90-91 to 92-93 and another from 95-96 to 97-98. In these years, Jordan also won 5 MVP awards.

Jordan’s GOAT case is so easy to make because of how flawless his career was and how he achieved that career. He came into the league and immediately impacted his team, leading them to consistent playoff appearances. He also won 5 regular season MVPs, and went 6-0 in the finals. Along with these accolades, his personality adds onto the Jordan effect. Jordan is probably the most competitive player to play basketball, due to the fact that he didn’t need much to get going. His killer instinct never turned off, and it would take the smallest things to get him going. For example, in one of the finals series, the Bulls were up against the Supersonics. During this series, the Bulls went out for dinner, and the opposing team’s coach, George Karl, ended up dining at the same place. However, George Karl didn’t go over to say “hi” to Jordan, and Jordan “took it personal”. Jordan absolutely obliterated the Supersonics, and after hearing similar stories, it’s hard to picture another player wanting to win more than he did.

Is Jordan the GOAT? What do you think?

Be the first to comment on "Making the Case: Michael Jordan"