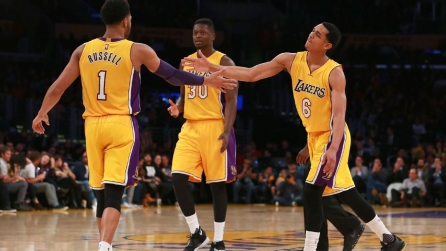 LOS ANGELES, CA – This was not supposed to happen.

As Stephan A. Smith of ESPN had predicted, “The Lakers are probably going to take at least two more years to make the playoffs.”

After an off-season where the team lost Kobe Bryant and was unable to sign any marquee free agents, this star-less Lakers squad was projected by ESPN analysts have the worst record in the Western Conference. Everyone believed the Lakers would have another losing season, miss the playoffs for the fourth consecutive year, and end up in the draft lottery again.

But now, after a couple weeks into the season, the Lakers are 4-3 and above .500 for the first time since December of 2013. More importantly, “the team is finally playing good basketball and is really fun to watch again,” says avid Laker fan Sneh Patel (’17).

Although there are still tons of games to be played, the team has impressed so far. Their wins have come against the Rockets, Jazz, Hawks, and Warriors (all playoff-caliber teams), and even their losses have been close and respectable. FiveThirtyEight places the Lakers at 6th in offense and 14th in defense, despite their finishing last in the league for both ratings last year.

Many credit the early success to new head coach Luke Walton, who has established a team-first mentality while preaching to the young players the importance of ball-movement, passing, and finding the open man.

“It does seem to have come together, and everybody pulls for each other, and Luke is the ring leader,” general manager Mitch Kupchak told USA Today.

The Lakers young core, which the organization hopes will be the future of this team, has completely bought into Walton’s message.  “The coaching staff, the whole atmosphere that this coaching staff brings is different…they bring a winning mentality every day,” said D’Angelo Russell, last year’s No. 2 draft pick, in an article by the LA Times.

“I would run through a wall for coach right now,” Clarkson said. “He’s doing such a good job. We want to get wins for him as well as ourselves.”

With the philosophy introduced by the new coaches, guidance of the veteran team leaders, and energy of the young players, the Lakers have jumped out to a great start to 2016-2017 and rejuvenated their fans.