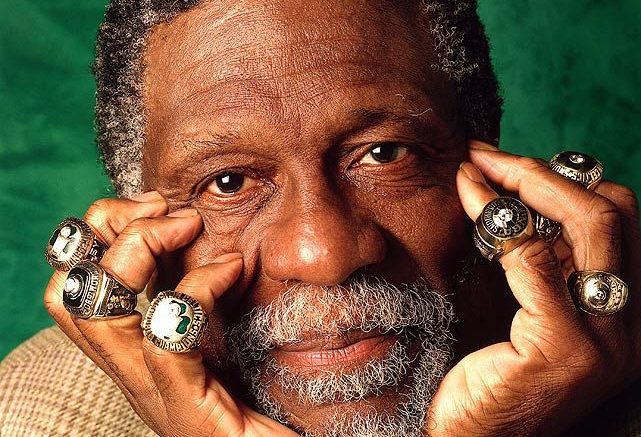 The Super Bowl. The World Cup. The Stanley Cup. The World Series. When you think of sports, you typically think of the final series or game of the season, because it holds the most weight. For the NBA, it’s the NBA Finals, and when it comes to the GOAT conversation, championships are one of the most important factors. In fact, many defer to championships as the fruition of one’s basketball career, and in this article, we will be discussing a player who won 11 championships during his tenure. 11. That is insane. No player has ever been able to win that many titles, and what’s even more impressive is the fact that when compared to full team franchises, he has the 3rd most championships. The only teams with more are the Lakers with 17 and the Celtics with 17 (he won his 11 championships on this team).

The player’s name is Bill Russell. Bill Russell came into the league in 1956 and immediately began dominating. While he may not have been a points scorer by trade like Wilt Chamberlain, he became the immediate model for big men. He averaged around 14.7 ppg and 19.6 rpg during his rookie season, and led his team to their first franchise championship that same year. After his rookie season, he became a consistent 15 ppg and 20 rpg player, who would lead his team to the finals every year he played. He even managed to snag 50 rebounds in a game, which should be enough to convince you of his physical dominance on the court. He was only 6’9” 220 lbs as a center, but he allowed his physical dominance over the game to help him change the NBA world. If a team wanted to win a championship during the ’50s and ’60s, they had to go through Bill Russell.

During the time, the only player who would be in the way of Bill Russell was Wilt Chamberlain. Wilt, to some, is considered the GOAT, and while he was competition for Bill Russell, Russell won almost every meeting in the finals. This would eventually hurt Wilt’s legacy for winning only a few rings during his career. Though Russell may have only played back then, he should still be remembered as the only player to lead a franchise to 11 rings in 13 seasons. Even if that may be the most redeemable part of his NBA career, I think that, by itself, should speak for his dominance over the game for so long.

What do you think? Is Bill Russell the GOAT?

Be the first to comment on "Making the Case: Bill Russell"