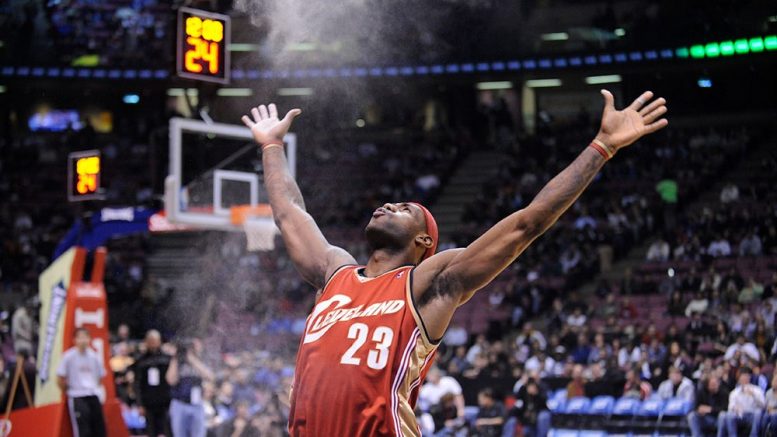 In basketball, there are players who are great at scoring, great at playmaking, great at defending, and great in terms of impact. But if you want a player who’s great at every single aspect of the game, the player you should be thinking of is LeBron James. He is by far the most versatile individual to ever play this game due to his high basketball IQ. From the beginning of his career to now his 18th season, LeBron has adapted to every trend the game has leaned towards, ranging from high physical play to shooting a large amount of three-pointers. Before explaining further the reasons for his possible GOAT status, let’s take a look at his unbelievable career.

LeBron declared for the draft as soon as he graduated high school at the age of 18 and was selected #1 overall to the Cleveland Cavaliers, who were coming off of a 17-65 season. Before even entering the court, LeBron was already dubbed “the Chosen One” and expected to become either a first-ballot Hall-of-Famer or a bust. In his first season in Cleveland, he led the team to a decent 35-47 season while winning the Rookie of the Year award. However, this was only the beginning of his dominance, as in his third season, LeBron led his team to the playoffs and won the first round against Gilbert Arenas and the Washington Wizards.

After this season, LeBron started becoming more and more MVP-like, as he consistently averaged around 28 ppg, 7 rpg, and 6 apg in his early seasons with the Cavaliers. Eventually, he led the team to the finals in his fourth season after sweeping the Wizards and winning against both the Nets and the Pistons (1st in the Central Division). Unfortunately, in the finals, LeBron’s Cavaliers were swept by the San Antonio Spurs.

In the following seasons, LeBron would go on to win his first two MVPs back-to-back, but the Cavs were unable to give LeBron virtually any help. Then, LeBron made one of the largest free agency decisions in NBA history with his move to the Miami Heat. On the Heat, LeBron won his second pair of MVPs and netted two championships. Afterward, LeBron returned to the Cavaliers with his iconic promise to bring a ring. His promise would go on to be realized in 2016 during one of the greatest finals series of all time. LeBron faced the 73-9 Warriors, who held the best record in NBA history, and he overcame a 3-1 deficit. With this ring, LeBron had already cemented himself as one of the greatest players of all time, and after his run in Cleveland, LeBron decided to move to the Los Angeles Lakers. On the Lakers, LeBron won his fourth championship by beating the Miami Heat in 6 games.

LeBron’s career averages in every season he played have been 27 ppg, 7.5 rpg, and 7.4 apg, showing his insane consistency over the course of his career. One of the reasons why so many consider him the GOAT is because of how he has been able to achieve these stats. Many describe LeBron’s career in three stages: the Cleveland years (when he maximized his physical dominance), the Heat years (when his prime took place and he became extremely skilled), and his post-Heat days (when he became one of the smartest players to ever play the game). Along with his versatility, LeBron has also been able to create a contender out of any team and has taken teams to the finals that had no business being there (2007, 2018… definitely 2018).  These are the reasons I consider LeBron to be one of the GOATs, if not the GOAT.

Be the first to comment on "Making the Case: LeBron James"