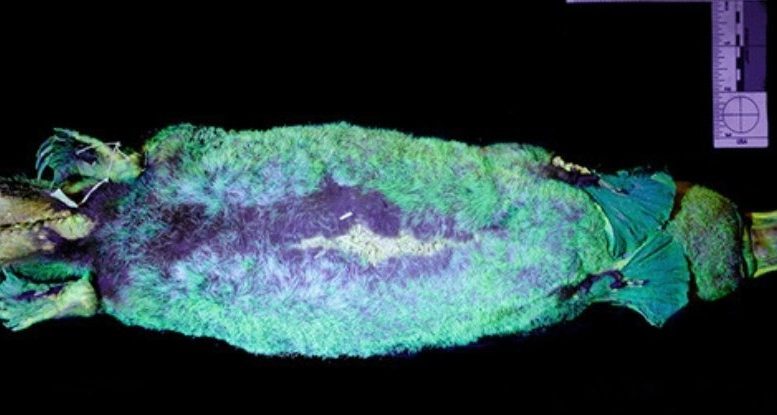 Platypuses (platypi? platypodes?): furry, semi-aquatic egg-laying mammals endemic to eastern Australia. Most will never encounter a platypus in the wild (unless, of course, you live in eastern Australia), and most children will recognize a platypus as its green, cartoon counterpart. While Perry the Platypus does have an extraordinarily fashionable fedora, real platypuses have proven far more mysterious, baffling European naturalists when they first encountered it.

Upon first glance, this egg-laying, duck-billed, beaver-tailed, otter-footed mammal looks like a strange mashup of randomly selected animals– a backfired science experiment, perhaps, or the live embodiment of a child’s crayon drawing. Over time, however, this mammal got a name, a classification, and a lot of attention from evolutionary biologists. In 1801, British biologist Sir Everard Home found that each male platypus he collected had a half-inch long “strong crooked spur” jutting out of its rear feet. Thus, it was discovered that platypuses have venomous heel spurs, and the term “spurring”–that is, getting stabbed by a platypus ankle thorn– was adopted. In the late 1950s, the platypus was found to have an electricity-sensing bill that allowed it to pinpoint the exact location of deep-sea prey, which explained how platypuses were able to accurately navigate through low-light areas. Egg-laying, electrical bills, and venomous heel spurs aside, researchers thought that they had discovered everything there was to know about these elusive mammals. Up until recently.

New research has established another odd trait for this Australian mammal to tack onto its ongoing list of weird traits: its fur glows in ultraviolet light. Platypuses have dense, waterproof pelts that absorb ultraviolet light and emit a blue-green aura. Mammalogist Paula Spaeth Anich and her colleagues encountered this feature by noticing that monotremes, a branch of mammals represented by the modern-day platypus (Ornithorhynchus anatinus) were close relatives to marsupials, the only mammals previously known to possess fluorescent fur. However, it still remains a question as to the purpose of fluorescence. Anich guesses that platypus fur provides camouflage from nighttime predators that have UV vision by absorbing, rather than reflecting, UV light.

More than three centuries have passed since platypuses were first discovered, and yet new peculiarities are still being found, which raises the question–what next? Anything is possible, but the importance of such fluffy, innocent-looking mammals in evolutionary and anatomical biology is undeniable. Long live Perry the Platypus.

Yina Wang is a sophomore from Naperville and would be living in 01C (if not for, obviously, a raging pandemic). You can usually find her picking up new hobbies, on her way to annoy her siblings, or sleeping. She's excited to navigate through her first year on the Acronym, and in the future, hopes to contribute to its growth!

Be the first to comment on "Platypuses: the Freaks of Biology"