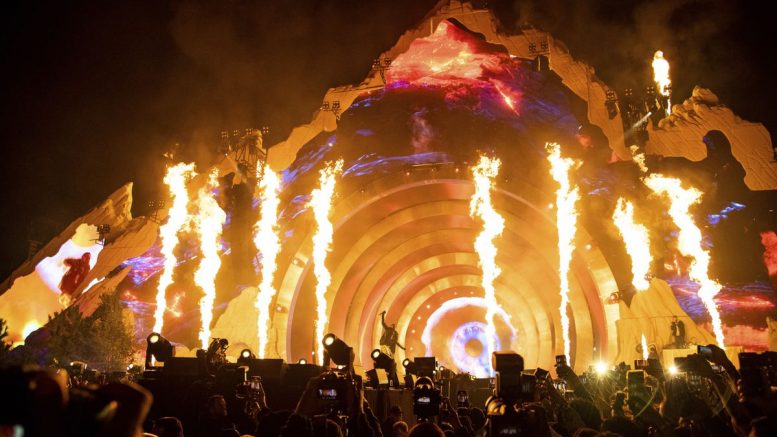 On the evening of November 5, nine people, ages ranging 14 to 27, died during the chaotic Astroworld music festival in Houston.

There was a crowd of over 50,000 people coming to see one of the highest-paid rappers in the music industry, Travis Scott. When the performance began, there was a stampede of people rushing towards the front of the stage, pushing everyone forward. Some collapsed and were continuously stepped on, leaving hundreds injured. It was described as “hell” by many individuals who attended the concert.

Nine-year-old Ezra Blount, who was a huge fan of Travis Scott, suffered several injuries because he was crushed and trampled over. His father was knocked unconscious and when he woke up, his son was missing. “I began to be crushed until I couldn’t breathe. And I woke up and my son was gone,” he explained in a GoFundMe fundraiser. He found Ezra at a local hospital, discovering that his son had sustained brain, kidney, and liver injuries and was in an induced coma. Due to these complications, Ezra passed away days later, making him the youngest casualty of this horrific disaster and bringing the death toll up to 10.

Just after the 9:00 a.m. start of the festival, spectators had already broken past the main gate, according to the handwritten logs. Shortly before 5:00 p.m., the fire department reported “dangerous crowd conditions” at one stage.

Eight minutes before Scott took the stage at 9:00 p.m., more than 260 people had already been treated, though the logs hadn’t specified the type of treatment.

One unknown officer reported that the main stage had been compromised around 9:11 p.m., citing emergency radio chatter. The chatter included “reports of breached barricades, people jumping gates, and breathing and cardiac problems” and continued until about 10:15 p.m. “There’s not a lot we can do. Stand by for now. We’ll have to wait, but the concert management will let us know,” an official told the security team.

It seems as though the officers had been wandering in the dark.

The head of security should have been in charge of this event if something like this happened, and that should have been clearly stated in any safety plans. Instead, concert management had higher authority over police officers, which is simply bizarre.

Less than half an hour into Scott’s performance, the logs state, “This is when it all got real.” At 9:33 p.m. police reported “multiple people trampled, passed out at front of stage.” A few minutes later, an officer reported five different 911 calls about “unconscious persons in crowd [with] report of possible CPR.” The logs report a Level One MCI — a mass casualty incident — at 9:52 p.m. From 10:00 p.m to 11:40 p.m. the logs show that 17 people were taken to hospitals, including at least six people who had gone into cardiac arrest.

In the aftermath of the concert, concertgoers have filed at least 110 lawsuits thus far. Scott’s being sued for a total of $2.75 billion. Scott’s lawyer, Edwin F. McPherson appeared on “Good Morning America” on Nov. 12 to make a statement on behalf of Scott. He had explained that Scott wasn’t aware of the full scale of what was happening and that the artist nor his crew were never informed that officials had declared the concert a mass casualty event.

“Travis didn’t really understand the full effect of everything until the next morning. Truly, he did not know what was going on.”

While McPherson might have a genuine argument, it seems like he’s just throwing a flimsy excuse together to try and protect Scott. McPherson urged the public to wait for the police to “finish their investigation” before we “start pointing fingers at anyone.” In response, Benjamin Crump, a famed civil rights attorney, also made a statement on behalf of his client, Noah Gutierrez. Gutierrez described a scene of “chaos and desperation,” Crump explained in his statement. “We are hearing horrific accounts of the terror and helplessness people experienced. The horror of a crushing crowd and the awful trauma of watching people die while trying to save them.”

Thomas J. Henry, Kristian Paredes’s attorney, put full blame on Scott for what happened in a news release. “There is every indication that the performers, organizers, and venue were not only aware of the hectic crowd but also that injuries and potential deaths may have occurred,” Henry said. McPherson explained that Scott “can’t hear anything, he can’t see anything” because of the lights in his face and the music in his in-ear.

There have also been several disputes between the public and Scott about his initiative during the concert. On social media platforms such as TikTok, there have been videos of people chanting, “Stop the show” while filming Travis Scott asking the crowd to “make some noise.” According to the Houston police, Scott continued the concert for over forty minutes after the casualties occurred.

On Scott’s Instagram story, he claimed that he was devastated and didn’t know about the deaths until after the concert. Creators on TikTok have been posting about his apology on Instagram using it as a trend to imitate a fake apology. Many are also comparing him to other singers like Ariana Grande after McPherson’s obvious reach to protect Scott.

In 2017, a suicide bomber detonated a bomb outside the arena Ariana Grande performed at moments before, killing 22 bystanders and injuring over a hundred. Grande paid for all 22 funerals, visited all the injured individuals, held a concert to raise money for the victims and their families for a calamity she had no control over.

Scott, however, rubbed his head on Instagram over a tragedy he could’ve easily prevented.

Be the first to comment on "Astroworld Festival Leaves 10 Dead: What Really Happened"