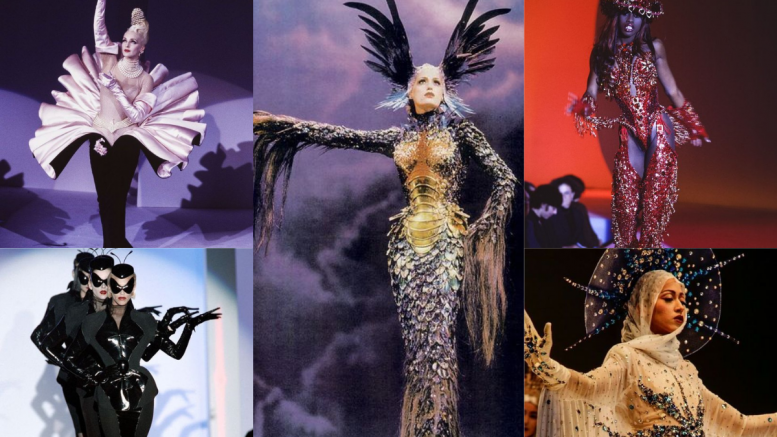 Thierry Mugler, born in Strasbourg, France, polished his talent for theatrics as a child when he began ballet at the age of nine and then joined the National Rhine Opera at the age of fourteen. After formal interior design studies at the Strasbourg School of Decorative Arts, he moved to Paris and worked freelance for several fashion designers in his twenties.

After a few years of freelancing work, Mugler presented his first collection under his label, “Café de Paris,” in 1973, collaborating with businessman Alain Caradeuc.

Soon after, Azzedine Alaa joined Mugler and created a look that fused the urban and the urbane, combining punk aesthetics with classic broad-shouldered suits influenced by the French military. Mugler debuted his men’s collection and opened his first store at the Places des Victories in 1978, signaling his arrival.

Mugler used his theatrical experience to redefine the runway, experimenting with latex, leather, and curves to make it a dramatic performance. He refused to be called a “fashion designer,” preferring instead to be named a “fashion director,” since he believed that “fashion had to be shown in its musical and theatrical environment.”

Mugler designed striking looks for some of the world’s most famous celebrities, including Beyonce, David Bowie, Kim Kardashian, Lady Gaga, and others. In 2009, he was named artistic director for Beyoncé’s I Am… World Tour where he dressed her in a bejeweled gold leotard. Alongside his involvement as the artistic director, he assisted with lighting, choreography, and production.

According to Women’s Wear Daily (WWD), the designer intended to create a look that embodied “the duality between being a woman and a warrior,” in doing so, he helped Beyoncé establish herself as a style icon and superhero in her own right. The lyrics inspired the lavish outfits, echoing Mugler’s interpretation of the singer’s essence: “Feminine. Free. Warrior. Fierce.”

In the 1980s, Mugler cast transgender models in his runway shows, and he made it a priority to collaborate with drag artists and other LGBTQ+ people throughout his career. Mugler featured New York drag star Joey Arias in George Michael’s 1992 song “Too Funky” among some of the best supermodels of the time.

Casey Cadwallader is carrying on Mugler’s tradition of gender inclusivity by casting trans actors Hunter Schafer and Dominique Jackson in the Spring/Summer 2021 show, following in the footsteps of trans models Raya Martigny and Kai-Isaiah Jamal.

The designer’s principles are based on constant transformation. His architectural shapes and beautiful style carved out new territory in the fashion industry. “I think it is inspirational and fascinating that Mugler was not influenced by fashion or trends,” exhibition curator Thierry-Maxime Loriot adds. “His designs are timeless and he is an icon in his originality.” Mugler envisioned a powerful, independent image of women, and his daring designs reflected that reality.

Fashion and Its Necessary Redefinition